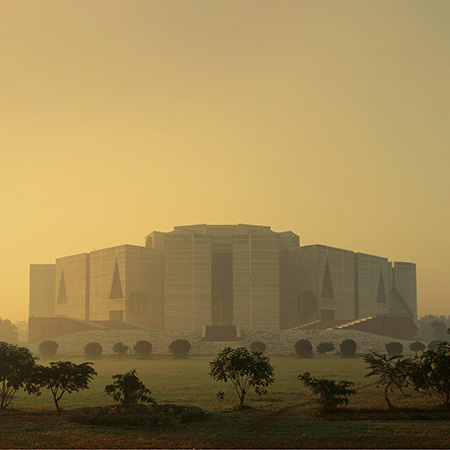 Architecture exhibitions are notoriously hard to mount. Not quite fine arts yet more than design, they defy preparators and curators’ efforts to balance thousands of diverse items than can border on idolatry or belong in a history or technology museum. The ginormous tribute “Louis Kahn: The Power of Architecture” kicks off the American leg of an international tour organized chiefly by the German Vitra Museum. It is just such a challenge, one with great rewards and a few carping disappointments that steer it clear of an otherwise exhilarating and inspiring experience. Basically, there are too many things in the space allotted it.

There is plenty for Museum Director Stefano Catalani to organize and arrange on the third floor of the heralded Steven Holl building. With ample room for painting, sculpture, and the recent hippie clothing survey, “Counter-Couture,” even the entire third floor is ultimately too crowded for comfort with this show. Provided there is no one else there, a visitor can easily navigate the jungle of pedestals, models, photos, plans, video monitors and signage, all subdivided into six categories: City; Science; Landscape; House; Eternal Present; and Community.

These are broad areas that cover Louis I. Kahn’s long career and involved, respectively, urban planning, building technology, nature, residential and public commissions. Considered the leading American architect of the 1960s and 1970s, the longtime Yale professor continues to have an influence on architecture today. However, considering he has only one building on the West Coast, the Salk Institute in La Jolla (1959-65), it’s worth remembering briefly why Kahn is still so admired.

The son of Estonian Jews, brought up in Philadelphia, he became a citizen of the world who traveled to India over 40 times on two important jobs. In fact, he was returning from Ahmedabad when he dropped dead of a heart attack in a men’s room stall at Penn Station in New York at age 73, the ultimate victim of jet lag. Before that tragic end, he had moved American architecture away from the confining severities of the International Style and closer to what became a refined and more humane public architecture. Beginning with homes for the Kormans, Goldenbergs and Weisses outside Philadelphia (1947-67), he progressed to the innovative Erdman Hall at Bryn Mawr College (1960-65); a prep school library and student canteen in New Hampshire (1965-72); synagogues, churches and community centers in New Jersey; a Dominican convent (1965-69); and an entire parliament project in Dhaka, Bangladesh (1962-1983). And all this besides the spectacular Kimbell Art Museum (1966-72) in Fort Worth, TX.

Each project, fully represented by photos, plans and models, took years to complete. As Kahn said at the beginning of the Bangladesh complex — which went unfinished for years during that country's war with India — “When its use is spent, and it becomes a ruin, the wonder of its beginning appears again.” He also knew, from his feisty years of Philadelphia city planning and infighting, how buildings can outlast politicians.

There are both breathtaking and poignantly personal moments throughout. The 12-foot-high reverse double-helix model of the huge “City Tower” (1952-58, unbuilt) dominates one gallery. Intimate mementoes of trips to Europe (where curiously he never won a commission) include postcards, letters and sketches and a suitcase are joined by office calendars, diaries, notebooks and volumes on architecture from Kahn’s vast studio library.

Trying to place Kahn in history, his influences could be traced to his teacher at Penn, Paul Cret; the Frank Lloyd Wright of Fallingwater; fellow Yale professor Josef Albers; and geodesic dome pal R. Buckminster Fuller (who influenced the tetrahedron ceiling at the Yale Art Gallery) along with ancient Roman vaults and Islamic water gardens, all of which led him to favor what John Jacobus called “distinct spaces in progressive sequences” instead of the “lean and hungry look” of Mies van der Rohe that dominated the 1950s. Kahn’s ingenious way of using vaulted concrete walls and ceilings with floor-to-ceiling windows to achieve a warmer environment rejected the impersonality of Mies, Gropius and I. M. Pei.

In turn, Kahn’s example of spiritual devotion to materials and humane architecture influenced and inspired subsequent architects like Steven Holl, Frank Gehry, Luis Barragan and Paul Rudolph. Kahn’s dream of uniting and integrating communities through architecture is timelier than ever given runaway development in the Seattle area, now the nation’s fastest growing urban center.