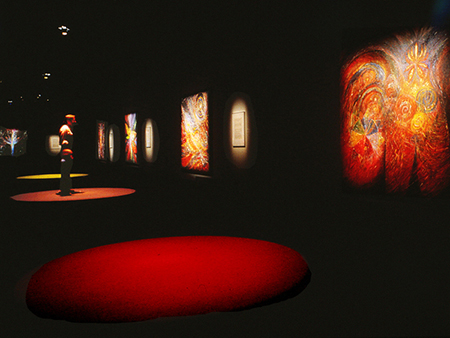 In my previous column I focused on a recent trend towards the creation of artist-designed sanctuaries in Texas. Making the point that Texas hardly holds a monopoly on this development, Phoenix-based artist Beth Ames Swartz is the subject of the new film, "Reminders of Invisible Light,” which made its debut recently at the Phoenix Art Museum. The artist has sustained a longstanding and steadfast commitment to creating art centered around spirituality.

I was first introduced to Swartz' art in 1982, when her work was included in a group exhibition at UC Irvine that was curated by the late Melinda Wortz, who had strong ties to the California Light and Space artists, particularly Robert Irwin. Wortz' exhibition featured a selection of Jewish women artists who were exploring the feminine aspect of God, known as the "Shekinah." Swartz' contribution to the exhibition consisted of works from her series "Israel Revisited," which she created using a ritualistic process at ten sites in Israel associated with biblical and historical women. At the suggestion of a rabbi, Swartz began each ritual by drawing a circle in the soil as an act of consecration. She then burned and buried several layers of paper mixed with pigments, retrieved the charred remnants, and later transformed them in the studio into colorful and earthy reliefs that suggest dead sea scrolls, Hebrew letters or vaginal imagery.

Swartz's artistic explorations of spirituality extend well beyond examinations of her personal Jewish heritage. An avid reader, Swartz has over the years been influenced by ideas that stem from Jungian psychology, Buddhism, Hinduism and Native American healing rituals, which she herself practiced at a ceremony led by a Navajo medicine man. Swartz attended the ceremony while recovering from the removal of a benign tumor, which had resulted from working with toxic chemicals to create the earth and fire reliefs. During her period of recovery, she also became interested in the Hindu chakra system of spiritual energy nodes located in the human body. The basic idea is that healing can occur as spiritual energy enters and moves from chakra to chakra.

While working on a series of paintings about the chakras, Swartz visited the Rothko Chapel and was moved to create her own chapel-like installation that would incorporate the chakra paintings and be structured on the chakra system. Additionally, she would use light and sound to create a multisensory experience that could nurture and uplift visitors. Entitled "A Moving Point of Balance," the installation opened at the University of Calgary's Nickle Art Museum in 1985, and toured the United States through 1990. From 1998-2007, it was on loan to the Arizona Cancer Center in Tucson.

Experiencing "A Moving Point of Balance" is something like visiting altars in a dark temple, with the journey involving a procession of stops at seven altars, each representing one of the seven chakras and presented in the traditional Hindu sequence. At each stop, the visitor is invited to stand in a circle of colored light that is projected from above and accompanied by soothing music composed by Frank Smith, while focusing on a corresponding chakra painting installed several feet in front of the circle. In these paintings, Swartz incorporated figurative images of body parts associated with each chakra, animals, medicine wheels and floral forms.

Inspired by a workshop that she attended on shamanistic healing, Swartz mixed the paint with metal leaf, crushed crystals, and microglitter, a move that foreshadows the current process of the abstract painter Jose Alvarez [see Part 3 of Rubin's essays on Zombie Abstraction-Ed.]. In Swartz’ work the mix produces optical effects that are perfectly suited to the idea of simulating spiritual energies. After moving through the progression of seven chakra altars viewers then enter the "Balancing Room," where projections of white light help to stabilize their perceptual and emotional reactions.

"A Moving Point of Balance" is indeed a pioneering and most successful example of an installation/sanctuary filled with positive healing energy. During its lengthy run, Swartz solicited viewer responses using computer-coded cards and questionnaires. The results of the survey were that the majority of respondents found that the installation made them feel relaxed, uplifted, stimulated or spiritually moved. Given the direction that has been taken in Texas during the past decade to establish permanent spiritual spaces designed by Ellsworth Kelly, McKay Otto and James Turrell, perhaps now is the time for Arizona philanthropists to consider a similar course, and begin taking the steps necessary to find a permanent public home for "A Moving Point of Balance”.