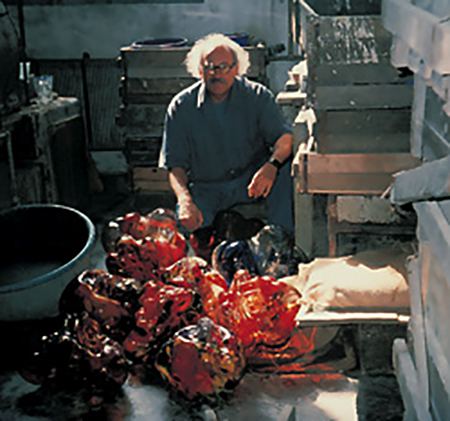 A 1996 photo of Marvin Lipofsky at the Dalian Shengdao Glass Factory, China, where he created sculptures

Just what do we think an obituary should be? One of the less fun things about getting older is that you find yourself attending more memorial services and, if you’re a writer, being asked to write obituaries or remembrances. You do both, of course, it’s part of being in a community, accruing relationships, and a courtesy to someone who touched you or your professional life and to his or her family and loved ones.

Marvin Lipofsky, a well-known Berkeley-based sculptor who worked in glass, died on January 15, 2016. I had the relationship with Marvin that I have with scores of artists: I wrote about him before I met him (I can’t remember if it was a review or a short catalogue essay for a gallery exhibition), he liked it, in the next several years he commissioned me to write another brief catalogue essay, we eventually met at subsequent SOFA Chicago art fairs. When he had his retrospective at the Oakland Museum of California in 2003 I contributed an essay to his catalogue. I’ve met and written about him a number of times since, including a profile on him for Art Ltd last May and an overview of his work for SOFA Chicago in November 2015, which was the last time I saw him. We had a friendly professional relationship — not so close that we visited each other’s homes or knew much about each other’s personal lives. We never had a meal together (we had coffee once). So we weren’t personal friends, but we were friendly, and I was always glad to see him at some glasscentric conference or event.

On the day he died I was contacted by a colleague who told me that Marvin’s family would appreciate my writing an obituary of him that they could circulate to the local and national press.  I did so (it should go without saying, but just in case, I did this for nothing, I could never take money for writing an obit) and then GLASS Quarterly asked me if I would write an obituary to be posted on their blog/website, which I did.

And that’s where things got interesting. It set off an intriguing kerfuffle in the comments section, with pretty dramatic exchanges from people who had radically different ideas about Lipofsky and his personality, not to mention about what an obituary should do. Lipofsky had, after all, a remarkably assertive manner. It’s fair to say I have never encountered an individual who, at the drop of a hat could become verbally vindictive in an outscale manner, with whom conversation could be a vituperative minefield of aggression. That’s just the facts, and I noted in the obituary that “While his later years were marked by a mellowed sense of peace and reconciliation, stories are legion about Lipofsky’s earlier years, where his fierce intensity and often combative manner tested many of his relationships with colleagues and dealers. He had a sharp tongue and never hesitated to use it . . .” You got used to that with him, and after the first time he lit into me it never bothered me again. It seemed that for him this was some sort of passive/aggressive defensive assault, that he had rage issues, no internal governor, and a blind spot to many of the behavioral niceties that regularly govern human interaction. But a lot of people who witnessed or were the brunt of this wrath never gave Lipofsky another chance, and retained resentment toward him that even death couldn’t assuage. These folks felt my obituary was somewhat of a whitewash.

But what should an obituary be? Is it akin to a Wikipedia biography or a kind of "warts and all" accounting? Or is it a time-stamped response to recent death, written while friends and family are grieving, couched in a tone that it’s better to say good of the recently departed, that the time for a complete assessment and a full biography can come later? I think each of us in our hearts has our own answer to that, but what interests me is that Lipofsky’s obit received such radically different responses. There’s far from a consensus of what an obituary should do.

When a person whom I think was an ass dies I keep my mouth shut and my laptop closed, at least in the short term. If I’m asked in such a case to write an obit or speak at a memorial service I decline and lie, claiming overwork or insufficient knowledge of that individual. I let their family and friends have that window of mourning that is a human courtesy that should overtake the need to always tell all the truth all the time. You haven’t lived a full life if there’s nothing in it you regret, if there’s been no incident that you now wish you had handled differently, if there’s not a wrong you committed to someone sometime. That’s life, and it should be part of how you are remembered — but does it have to hashed out the week of your death? I didn’t write anything that wasn’t true in the obituary for Lipofsky. But it’s fair to say I didn’t tell every single thing about him that I knew.

Of course, none of this is important to the artist now. Obituaries are for the living, they’re a form of social leave-taking that for centuries has been about alerting the public of the death of someone who has significant accomplishments of some sort to his or her credit, and listing them dutifully and respectfully. That, on the whole, is a good thing, and if I err sometimes on the side of courtesy, I’m at peace with it.