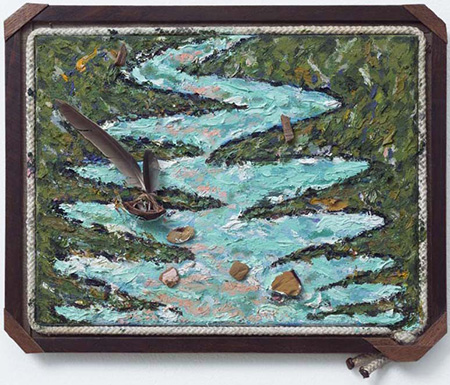 Daniel Rios Rodriguez is known for his modestly-sized paintings and drawings featuring bold line work and collaged material. The Yale alum’s aesthetic is Modernist-meets-Outsider, with knowing, painterly conventions commingled with rather straightforward imagery and narratives direct from his everyday life. Rodriguez’s prior works are populated with images of symbolic skulls and literal paintbrushes. For the current show the natural landscape surrounding the artist’s home in San Antonio, Texas provides his subject matter.

Obviously, drawing inspiration from the landscape is a practice that’s as old as image-making itself. But Rodriguez doesn’t merely depict or reflect the environment in his works, he physically merges the outside world with what he creates in the studio. In works like “Old and New Dreams,” a real snakeskin patch-worked with bits of fabric is affixed to the canvas amongst stylistically rendered leaves. “Rios Rodriguez” features a thickly painted river of sharp, winding turns sporting an actual pecan shell stuck with feathers like a little elfin sailboat. Around the edges of his canvases the artist fastens handmade frames of rope or battered wood. The interplay between flatness and dimensionality, painterly illusion and affixed objects, is the component that makes these works compelling. With imagery made up of both representations of things and the things themselves, the paintings become objects that are as lively as that which they depict.