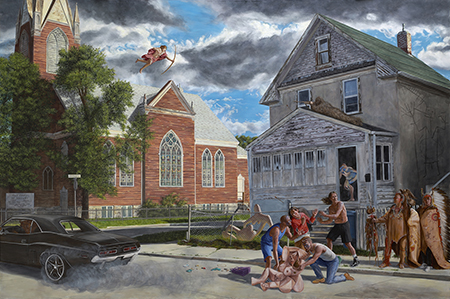 My first experience with Kent Monkman's work was at SITE Santa Fe in 2014, when his installation "Bête Noire" appeared in the museum's biennial reboot, "Unsettled Landscapes." This Canadian Cree Nation artist's drag queen alter ego, Miss Chief Eagle Testickle, sits on a motorcycle before a Romantic-style Western vista. A cubistic bull made from animal pelts is sprawled below her on a bed of desert soil, pierced with arrows as though poached straight from Picasso's "Guernica." Miss Chief gestures toward the flattened beast and looks sadly out at the audience. At the time, this send-up of a natural history museum tableau, with its mash-up of art historical references and stagy injection of queer identity, struck me as bombastic and clumsy. I never would've guessed that further ramping up the chaos would elevate the work.

The bull from "Bête Noire" reappears in Monkman's solo exhibition "Failure of Modernity," plucked from its installation and mounted on the wall like a war trophy. All around it is a series of massive canvases that read like a row of windows that reveal an embattled contemporary ghetto. Assorted modernist archetypes — Picasso's bull and muses, subjects from Francis Bacon's warped portraits, Henry Moore's reclining nudes — limp through suburban streets, unsprung from their canvases and crippled by the physics of a realistic landscape. Renaissance angels blaze through the sky, sending arrows raining down on the modernist monsters or violently snatching them up. First Nations people of the past and present tend to the wounded, while Miss Chief shows up as a matador to fight the bloodied bull. The impeccably painted scenes, which mimic the style and scale of 19th century colonial history paintings, effortlessly hold the referential weight with their dazzling, satirical theatrics. A series of lush videos on wall-mounted screens capture the same effect. In one fell swoop, Monkman skewers the revisionist history of North American Romanticism and the mythic pretensions of modernism. He signals the collapse of a rigid moral narrative that has obscured the dark history of Colonial North America for centuries.