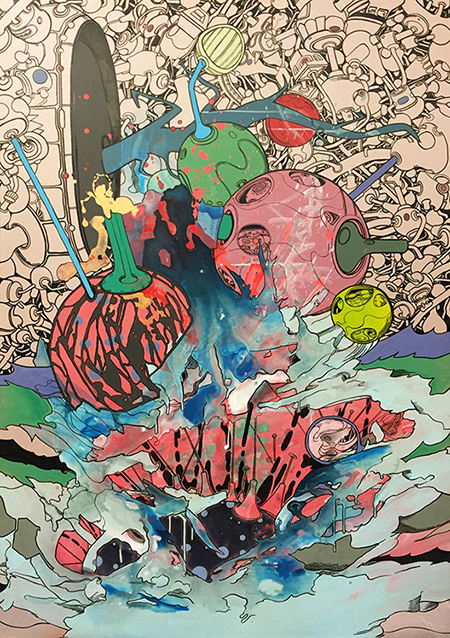 This past fall, the traveling exhibition titled “My Generation: Young Chinese Artists” completed its three-and-a-half month run at the Orange County Museum of Art. Among the stated goals of curator Barbara Pollack was to counteract expectations surrounding the style, subject and even mediums utilized by contemporary Chinese artists, and to do so through the work of those born after 1976 — the year of Chairman Mao’s death and, accordingly, the final year of the Cultural Revolution. While the parameters of “Across the Pacific" include no such age requirement — dates of the five Taiwanese artist’s birth on view range from 1955 to 1990 — there exists a similar drive to urge viewers to let go any preconceived notions.

The synthesis of East, West, Chinese and Japanese influences present in the work of these artists should come as no surprise to anyone familiar with the island nation’s history. Since the 16th-century the region has been overseen by foreign rule: the Netherlands, China, Japan, followed by the post-war transfer of power to Chiang Kai-shek that led to over two decades of Martial Law. Today, the political split between those who strive for Taiwan’s independence and those who promote a re-orientation towards China, both politically and culturally, runs deep. At the time of writing this article, the elections for Taiwan’s president, pitting the soaring popularity of Tsai Ing-wen (leader of the Democratic Progressive Party) against the incumbent, Kuomintang Nationalist Ma Ying-jeou is only days away. The complexity of the past and contemporary is reflected in the art seen here.

Such political issues are not overtly addressed in the works on view. But the diversity of cultural influences is prevalent. Western elements are most overt in the works of Chien-Yang Wang, through incorporating elements associated with Western popular culture. A trio of photographs document surreal visions performed in elaborately staged rooms, which the artist describes as a “house.” The sense of this is derived from the Japanese notion of Otaku, where “people take shelter in for their everyday lives” and which “becomes a fantasy stage in a subconscious inner space.” The props range from candy-colored Warholian Monroe wallpaper, an oversize Duplo block fairytale castle, Godzilla versus Megalon rendered in childlike cardboard recreations. In each, scantily clad figures create undertones of sexuality beneath the childlike façade.

Themes of shelter are inherent in the mysterious layered landscapes of Tsu Han Su, who undermines expectations of what the artist describes as the “everyday living environment” and, instead, suggest a sense of precariousness beneath what are on the surface idyllic scenes. The small sculptural works consist of found objects suspended in layers of clear epoxy, while figurines set on or adjacent to the resin blocks are blissfully unaware of the murky objects held within. Equally mysterious are the small sculptural works by Yi Li Yeh, like puzzles assembled from disparate ready-made elements. The artist describes the influence of Zen, most notably in the desire to capture the ephemeral passing of time. The works, like anecdotal Koans, present parables for which there is no known narrative or solution.

New York-based Tang Wei Hsu, the youngest among the artists on view, experiments with biomechanical illusionism to suggest what lies beneath the surface. In the artist’s statement, the work explores “the relationship between the miniature and enormous.” This manifests most visibly in his earliest works, “Device Through the Macrocosm 1 & 2” (both 2007). In each, amoeba-like holes in sky-blue skeins reveal complex networks of fantastical space-age machinery that conjures a surreal envisioning of mechanized human anatomy. More recently, there is a re-ordering to the compositional structure. Where the earlier work suggests enlarged microscopic views of anatomical forms, the latter works evoke a sense of environmental chaos, with machine-like forms invading into amorphous, brilliantly colored landscapes.

The elder statesman of the group, Marvin Minto Fang also investigates notions of the natural world, and is known in China for his large-scale public sculpture installations. Fang evokes humanity’s interference in the natural world through his bonsai-inspired forms. The twisting tree-like forms are assembled from stacked layers of unpainted plywood. They feel no more constructed than a Bonsai tree that requires years of manipulation to achieve the desired result of seemingly having been shaped solely by nature. When you reflect on it that way, political associations can be read into these works.