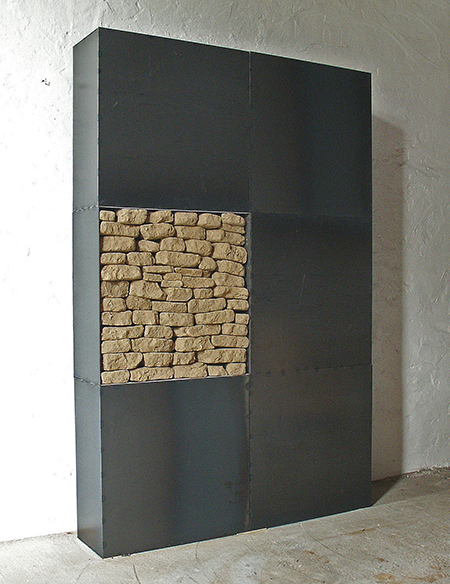 The art movement referred to as “earthworks” or “earth art" began in the late 1960s, when a group of artists rejected the commercial art world and began looking to the earth for materials, inspiration and scale. In 1969 a Cornell University show entitled “Earth Art” included Walter De Maria, Michael Heizer, Richard Long, Robert Morris, Dennis Oppenheim and Robert Smithson. This current exhibition of “Earthworks” presents sculptures and paintings by two German and one Mexican artist who are similarly inspired, though limited to the size of the gallery rather than the vast outdoors.

Perla Krauze collects rough-hewn blocks of stone, casts them in colorful resin and fiberglass, and stacks them or hangs them on the wall. Sixteen translucent blocks (13 by 13 by 8 inches each) created over the course of eight years comprise “Blocks,” which are arranged on the floor in four uneven columns. Using mostly pink, purple and white elements, Krauze creates an architectural floor sculpture with a playful quality that tempts the viewer to re-arrange the blocks, which are surprisingly light. The overall feeling of Krauze’s installation is cool and serene.

Mario Reis has been using nature to create “river” paintings in the colors of the earth since 1977. He submerges a blank stretched canvas in the shallow waters of a riverbed and allows the natural sediment to settle on the canvas and “color” it. The completed pieces reflect the soil unique to each of the rivers, which were located in Japan, Germany, Arizona, Colorado, New Mexico and California. The various shades and textures of each canvases are the result of the “natural pigments” and accumulated sediment. Each piece also reflects the passing of time as the river flows around it.

Steel and clay/soil serve as Madeleine Dietz' primary materials. She collects soil from a particular location and mixes it with water to create mud, which she spreads into a thin layer and dries in the sun. As the mud dries, it cracks into stone-like objects, which she inserts into steel sculptures. The steel totally encapsulates the “stones,” except for a narrow horizontal slit through which a small portion of them can be seen. “Column Haus Landau,” a dark totem standing 79 by 28 inches, gains power as an image by hiding mysterious secrets glimpsed only through its narrow opening.