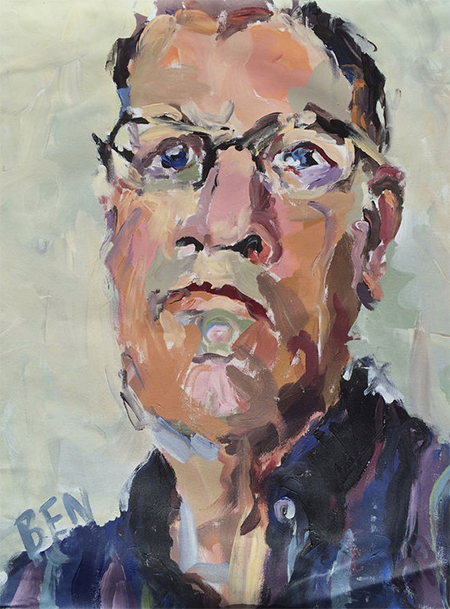 Great mobs of portraits have seized the walls of Santa Fe's top art spaces these days. There was Axle Contemporary's community photography project "E. Pluribus Unum: Santa Fe", which inspired painter Hye Coh's "100 Portraits" at CCA. California artist Ray Turner took a spin through Santa Fe for his multi-city "Population" series, on view at Peters Projects. Now Ben Haggard unveils a similar experiment of the last five years titled “FACES." Haggard painted portraits in Santa Fe, San Francisco and Berlin, building an analog social network in each city through recommendations from his sitters. A small selection of the 200 portraits he made in Santa Fe crowds the lobby. Subjects range from celebrities like Ali MacGraw to the artist himself. It's no surprise that a community christened "The City Different" fancies itself worthy of colorful depiction, but this runaway trend begs the question: does Santa Fe have a vanity problem?

Haggard's stab at the subject is noticeably different from Coh and Turner's projects. He stuck to a time limit of two hours for each subject, and chose a gestural style that distorts their features, often grotesquely. MacGraw looks positively brutish, and other familiar faces sag and bulge like syrup-filled water balloons. The slapdash depictions on sizable canvases remind me, in a way, of the portraiture of Elaine de Kooning, whose loose portrayals of male abstract expressionists aimed to capture aura rather than appearance. Haggard's paintings aren't so much caricatures as impressions of a brief moment in someone's existence. Even so, a SITE employee told me that some of Haggard's sitters were disappointed, and even disturbed, by their portraits. "It's some kind of invasion," said de Kooning of viewing her work. "When I have them around, I have all these people looking at me. It's oppressive."  I imagine Haggard held his breath at the reception, when flesh-and-blood Santa Feans collided with their painted counterparts. Who is observing — and judging — whom? It's a wicked flip in the psychology of such projects. Perhaps certain Santa Feans will buy their portraits just to burn them. To Haggard, I say bravo.