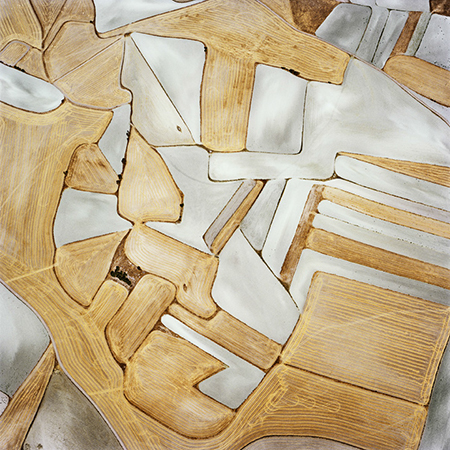 Photographer David Maisel continues his aerial exploration of human-altered landscapes (these were taken from a helicopter), focusing here on three locations in Spain between Toledo and Madrid: a mining and agricultural area, a cropland and a failed urban development. The title of the exhibition refers to the fact that the images were shot during “The Fall,” known figuratively through the ages as the season of dying. The color palettes of the three sites, therefore, are replete with earth tones, and, as Maisel notes, they “speak” to each other. The fact that all are unfinished developments is a reflection of not simply repeating seasons, but also refer to Spain’s flagging economy since the Great Recession. The highly irregular shapes of the croplands and agricultural fields lend insight into the history of the land, how it has been divvied up over time. These are not the same squared off divisions that one sees at the corporate farms in the United States.

That said, Maisel doesn’t consider himself a documentarian, and rightly so. Maisel shoots from a moving vehicle in the sky, where it’s windy and noisy, a situation that doesn’t allow for the same image to be taken twice. Flying is also expensive, and thus time is limited. So inasmuch as Maisel can have a plan of where to shoot, the images are spontaneous. Whether a direct  product of this or not, they have a painterly feel, and the compositions are as much or more about color and form as they are about recording a place. Adding to the painterly quality are the repeated traces of earth movers and tractors and other farm equipment, which appear like brush strokes from this elevated vantage point. Once shot (these were taken in 2013), Maisel can then spend months meticulously building up the pictures layer by layer — much like a painter. The final and exceptional results are luscious colors in complex and detailed compositions.