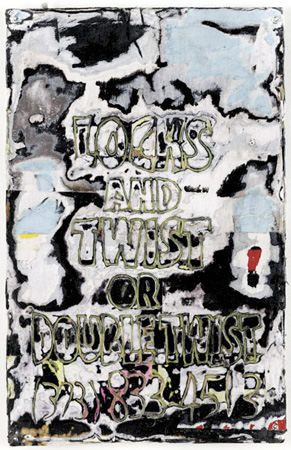 The sign reads 'The Greatest Artist in the World' in bright, fluorescent colors. It's sitting on a number of similar, handmade signs hawking 'Cash for Homes,' 'Funerals for Less' and 'Sober Living.' They're all neatly stacked and placed in a cubby in the back of Mark Bradford's tidy studio in Leimert Park, Los Angeles. Bradford calls them 'merchant posters' since they're service-oriented, and he has been finding them around his neighborhood for years. But he's particularly fond of the one announcing 'The Greatest Artist.' 'I found this on the day I received the MacArthur grant,' he says, pulling it from the pile. I thought it was kind of funny.'

Indeed, the 2009 MacArthur Fellowship (worth $500,000) was yet another startling achievement in Bradford's already impressive career. Since he graduated from CalArts in 1997 and sold his first painting in 2001 (to Eileen Harris Norton for $3,500), he has been invited to biennials at Sao Paulo, the Whitney, Liverpool and Madrid, and garnered other awards, including the $100,000 Bucksbaum Award (2006). Today his larger works command prices as high as $250,000 and he's currently preparing for a show at the Aspen Art Museum (Feb 12 - April 4, 2010), which will present his work with the very same street signs mentioned above, and a large-scale, mid-career survey at the Wexner Center for the Arts in Columbus, Ohio, opening in May.

But you wouldn't necessarily know that by meeting him. At 48 years old, his personality eschews pretension or ego-ridden flamboyance, qualities that might be expected from an artist who has jumped into blue chip territory in such a short period. With a broad smile and a quick wit, he's an interesting mix of down-to-earth sensibilities and composure; disarming modesty and drive; casual indifference and urbanity.

But it's the contrast between high and low that is most relevant to Bradford, both in his life and in his art. He's best known for his gigantic, highly-crafted paintings, which often have the tangible presence of early Rauschenbergs or Kiefers, with a thick surface made up of found material. Despite their size (generally 8-12 feet tall) they're surprisingly lyrical and mesmerizing, with twisting, glittering fragments shooting off into different tangents, and deep, etched layers that ultimately create fantastical, spacious vortexes and wide open territories. That has led some critics to compare him to Lee Mullican, Raymond Hains or Jean-Michel Basquiat. 'They dazzle the eye with flickering color sets in undulating expansive fields,' writes Gary Garrels, former chief curator of the Hammer Museum, who is now chief curator for painting and sculpture at SFMOMA.

To the average viewer, the overall effect may resemble a topographical map, both figuratively and literally. Grid-like patterns might suggest streets, contours might suggest land masses, and each layer might be read as chronological periods, much like the rings of a tree, or as Bradford says, the various 'filters we might use to interpret what we see.' But there's nothing specific about them, says Bradford, at least in terms of geography. 'They're more like maps of my imagination,' he says. 'Maps of desire.'

Nevertheless, his native city plays a significant, if not crucial, role in his paintings, sculpture, videos and prints. Like the artist John Chamberlain, who was famous for his crushed automobiles, Bradford's first job was cutting hair in his mother's salon--and painting her signs. Both his mother and grandmother operated beauty salons back east, before moving into a boarding house in South Central LA in the 1960s, which is where Bradford grew up. 'I come from a family of merchants,' he says. 'But merchants don't really have a class. We're more like gypsies. We're not a part of the middle class value system, because we're there to serve everyone, of every class.'

That gives his merchant posters at the Aspen Art Museum particular relevance. In many ways they represent Bradford's background and neighborhood more than any of his other works, since he finds them on telephone poles and fences, and they almost always speak to race, class and social conditions. AAM's chief curator Heidi Zuckerman Jacobson likes to compare them to concrete poetry, in the sense that they are worked over much like his paintings and use similar techniques of erasure and the deconstruction of the common. But she doesn't see them as regional. 'Though they have specific text-based elements,' she points out, 'Mark is getting at something larger, which is the idea of people preying on others who are in desperate situations. And that's not regional. That's national--even global.'

Part of Bradford's interest in using found objects, at least when he was starting out, was to erase any direct references to his own hand. Most of his early constructions, paintings and collages have little, if any evidence of his own mark making. Rather he lets his found material create the lines and contours. 'Now I do put down marks,' he says. 'So you do see evidence of my hand and my mark making in the current work.'

What hasn't changed is his use of paper. As he points out, he's allergic to petroleum-based chemicals--whether it's turpentine, oil paint, gasoline or perfume. So it was easier to use paper and he liked the challenge of 'making paper sing,' as he says. 'I've always thought of paper as a bundle of matter woven together, like follicles,' he explains. 'It's not a sheet of paper, it's a substance, and I'm always trying to see if I can get that substance, or those molecules, to float a little bit more.'

As he says this, he's sitting in a chair that barely holds his lanky 6' 8' frame, in the middle of a large, all white studio with towering ceilings. It's surprisingly quiet, which he says is his favorite kind of environment. 'I don't listen to music or anything like that,' he says. 'I'm one of those guys who could sit for hours doing nothing at all.' Maybe so, but he has hung nearly a dozen 3' x 4' paintings on two opposing walls, each perfectly spaced from one another, and each at the exact same height. Bradford claims that they're just 'sketches' and far too small to be exhibited. 'These are postage stamp-size to me,' he says with a smile.

As sketches, he will continue to add layers of paper, string, billboard material and found objects until he finds a direction that works. Once he does, he transposes that same process and design to a much larger canvas, adding layer upon layer, building up and sanding down to unearth fragments, words and images. Then, at some point, he says the painting will 'take a u-turn' where his palimpsests push him into new directions. 'There's always that middle passage,' he says, 'where there's a newness to it. So you follow that and at some point it just locks together. But usually the first time it does that, it's too safe. So I have to go back in and kill the father and let it find another path. And sometimes I have to go back in and kill it four or five times.'

More importantly, at least to him, is the fact that it's all 'intuitive' as he says. He doesn't set out to instill a theoretical framework around any of his work, even when he installed a hair salon at Art Basel in 2002, where he and his mother gave away free haircuts to people who would generally never visit an art fair. It was still an intuitive act, he says, rather than a Marxist or conceptual practice. And that's particularly true for his abstractions. 'When I'm painting, I'm generally interested in specific ideas that I'd like to convey,' he says. 'And if I can catch those ideas in the painting then I think it's successful. But ideas are not entirely in logic. They're partly in logic and partly where logic meets intuition, and I definitely work from intuition.'

Indeed, the sensual and the epicurean are at the very heart of Bradford's aesthetic, which is part and parcel of his general interest in the body. That might have been more obvious in his earlier works, when he often depicted figurative bodies; and it's still quite obvious in his videos today. Practice (2003) features Bradford in a Lakers' jersey and hoop skirt, trying to play basketball; in Niagara (2005) he shows us a black protagonist walking down a residential street with what could be a Marilyn Monroe swish. For some critics, that might suggest that his videos are more personal than his paintings. But as Bradford points out, photographic images are more easily read as surrogates than painterly ones. 'Every time you see a body, a real body, you connect it to a story,' he says. 'So I can understand how people read the videos different from the paintings. But I can clearly see where I was at in each of my paintings; my high points, low points, and everything in between.'

Even though his abstract paintings are ambiguous, the presence of his body is not. A map, he says, is the representation of space, and a space is often the container for bodies. 'And I'm very interested in the ways in which space, or spatial concerns, are kind of mapped over bodies of land,' he adds. 'So there's always this idea of looking down from above, not necessarily from a God's eye view, but maybe from a bird's eye view.'

To that end he still dreams of doing a truly epic-sized canvas, one that would be much bigger than the 60 foot long painting, Helter Skelter, he did for the opening of the New Museum in 2008. 'I would love to do a mural-sized painting,' he says. 'I love that scale, the scale [the] Social Realists were doing in the 1930s. I would love to do something that big.' He knows that might take years, but he doesn't mind. 'You know the story of the tortoise and the hare, right?' he asks. 'I'm really the tortoise. I may look like the hare, but I'm really the tortoise, going step, by step, by step.'