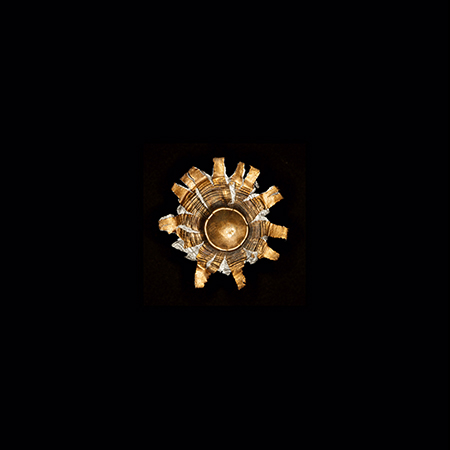 When recreational shooters head to the Arizona desert for target practice on old cans, tires and, sadly, cactus, chances are they pay little attention to their impact on the natural landscape or on the objects they leave behind. In his solo show “(Un)Intended Targets,” William LeGoullon comments on the fallout of American gun culture by elevating all manner of bullet-riddled found objects into things of beauty through immaculately produced color photographs. Like a conscience-stricken archaeologist, LeGoullon has recovered such things as fire extinguishers, gasoline tanks, beer cans, paint canisters, vases and water jugs. Some are so pounded by bullets and rusted out that they are about to crumble.

Usually they stand on their own, as in an enlarged depiction of a purple, glittery sugar “Skull" that has had its folk-art charm blasted right out of it. Clay discs become the prized artifacts in a series of 15 images called “Melted Clay Targets Recovered From Brush Fire Caused by Shooters.” In “.45 Colt” the spent bullet casing is almost unrecognizable — LeGoullon has enlarged the image and placed it on a black background to show off its golden, starburst-like quality and textural details. In another compelling image, a stark black-and-white photo shows a petroglyph damaged by bullets. Altogether, the photographs — which are dazzling and the stuff of justifiable documentation — leave the viewer with a remorseful sense of wanton destruction.