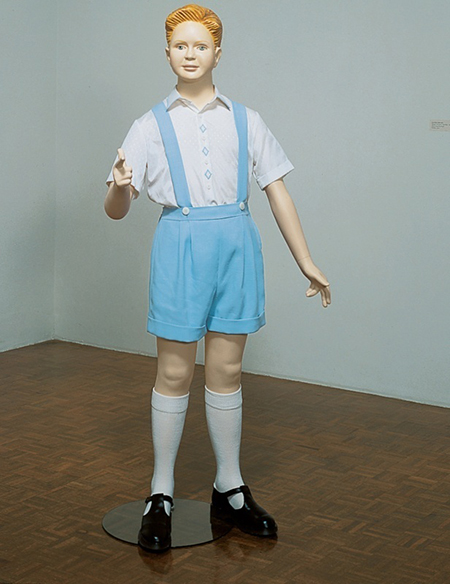 Oh, joy of joys!  If you love, really love, art museums (and I do) and you particularly feel bonded to your local one (and I am) and haunt its galleries repeatedly (yep), alert to subtle changes in its programming and collection (they can move a painting ten feet and I’m on it) and consider it the center of your visual life (you got it), there’s nothing more thrilling than when the museum reinstalls and reorganizes part or all of its permanent collection.  What glories reside in that reshuffling, when a curator rethinks his or her domain, brings up forgotten things from storage and highlights new acquisitions, and even just the act of moving the core collection around suddenly makes everything feel different, freshened, intense and invigorated.

That’s just happened at the Art Institute of Chicago, where James Rondeau, its curator of contemporary art since 1998, has reframed and rethought the several dozen galleries that exhibit art since 1945.  His previous installation wasn’t particularly dated, it debuted with the opening of the AIC’s Modern Wing in May 2009. Six or seven years is a short life for the hanging of a collection. Two factors, though, invited Rondeau’s intervention here: the complete removal last summer of the AIC’s collection since 1960 in order to install the Charles Ray exhibition; and his need to recognize the enormous impact of the donation to the Museum of Stefan Edlis and Gael Neeson of 44 modern and contemporary works.  The Edlis/Neeson gift is tremendously generous and a game-changer. Estimated at a value of about half a billion — I think it would fetch more than that — in one fell swoop the AIC’s collection of artists such as Koons, Murakami, Fischl, Sherman, Johns, Twombly, Fritsch, Warhol (for Warhol alone the AIC went from displaying one painting by him to now possessing ten), Richter, Marden, Hirst and Ray was significantly enriched.  While Rondeau could have exhibited the gift in toto in a stand-alone exhibition, he chose to integrate it into a broader rethinking of the AIC’s holdings. The newly acquired works are distinguished by their group on several walls painted a slightly darker gray than the rest of the installation.

The previous installation was dutifully chronological. A few artists were given rooms to themselves: Ellsworth Kelly, Gerhard Richter, sometimes Ryman, Twombly and Robert Gober too. A room or two were set aside for rotating mini-installations/exhibitions of Chicago artists, recent acquisitions, and the like. The Modern Wing finally made possible a long held dream of the administration to make it possible for a visitor to, without backtracking, move through the Western collection from 1300 to 2000, a single linear path through the history of art. Rondeau fulfilled his part in that.

But now, in an installation he dubbed “The New Contemporary,” Rondeau leaves a good deal of that behind. There is next to no chronological thread in the new installation, the rooms accrete in fits and starts, each with its own integrity, but often curiously distinct from that which preceded it and that which follows. You find yourself pinballing to and fro, getting lost in a maze of intelligently conceived and highly idiosyncratic rooms. It feels akin to the experience one gets at a really great art fair, where the thrill is about what might be around the next corner is palpable. It’s exciting, thought-provoking and slightly manic —and undoubtedly intended to be such.

It shows contemporary art to be speculative, global (I counted artists from 19 countries on display here), and by its nature resistant to the meta-narrative that chronological installations invite. Miami Basel, not MOMA, is now his mode. It’s a book of collected essays as distinct from a single subject text, an acknowledgment that the thread that runs through it is the author, not the subjects.

There are winners and losers in Rondeau’s installation. The disappearance of Hesse, Kawara, Murray, Rosenquist, Ryman, Stella, Serra and others from the walls of the AIC will be noticed by many. Richter looked about 1,000 times better in the 2009-15 installation than he does here. Rondeau continues his disinclination toward Neo-expressionism. No Kiefer here, nor in the 2009-15 installation, nor in either installation were Schnabel, Longo, Salle, Polke, etc. included, despite the fact that AIC possesses fine examples of each. His interest in Chicago artists remains spotty. But you can’t add 44-plus works — there were a few loans shown here too, including Jasper Johns’ 1959 "False Start” — without losing space that other works occupied.

There’s a sense that moving forward, Rondeau will keep things more flexible, that while some rotation of works always did occur, adjustments will occur more regularly. Quibbles aside, this is a riveting reinstallation. For the first time in its history the AIC can claim to have a 20th/21st century collection fully competitive with its 19th century glories. Rondeau and his colleagues should be congratulated.