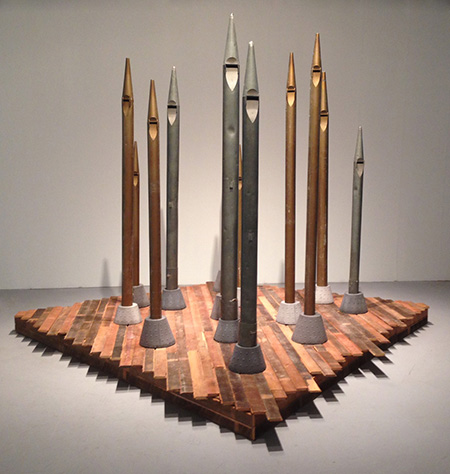 At this moment in time, as the tensions over white-dominated society’s preconceived notions of black male identity are coming to a head in our national dialogue, DC-born, Chicago-based artist Jefferson Pinder creates works that address the multifaceted nature of blackness. From the violence and tragedy of the suspended billy clubs of “Gauntlet,” to the fierceness of Obama’s angry eyes recreated in neon in “POTUS,” to the heroism suggested in the organ pipes of “Moriaen’s Shadow,” Pinder approaches each of these differing aspects with a simple, poetic clarity.

While the object-based pieces in “Onyx Odyssey” project a powerful, physical presence, Pinder’s performance-based works are the ones that resonate the most. And again, the performative works (on display in the form of videos and projections) run a gamut of different contents. In “Afro-Cosmonaut/Alien (White Noise),” the artist paints his face and head white, causing him to disappear into the white background behind him. Images of space travel are then projected onto him, suggesting notions of otherness and being invisible while in plain sight. “Revival” features a series of black actors lip-syncing the lyrics of popular rock songs, including “Sympathy for the Devil” by the Rolling Stones — a band that is one of the most blatant and popular examples of black music appropriated by white musicians. As viewers watch these lyrics formed by the mouths of black people, it’s especially poignant that it is Jagger’s voice, and not theirs, that we are hearing.