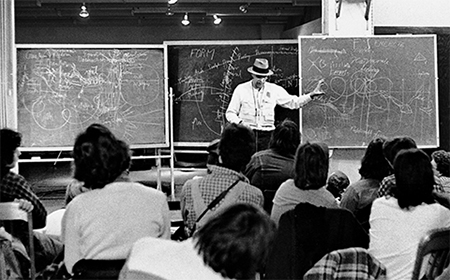 It’s a new year, but Americans’ optimism — traditionally manifested in New Year’s resolutions — seems at a low ebb. We face a political culture that’s corrupt, cynical and childish. Our economy, while largely recovered, remains vulnerable to another massive wealth transfer like the one of 2008 (see "The Big Short"). We’re still dragging our feet over energy policy, after generations of oil-financed delay and denial, with two branches of government still in thrall to fossil fuel lobbyists. The global plundering of natural resources and anthropogenic climate change, denied (heatedly) as a hoax by some, threaten millions with starvation and forced migration. If Fortress America believes itself immune to devastation (remember our hubris after the USSR fell?), it should storehouse lots of snacks before holing up with its beloved weaponry.

What’s this got to do with art? Art has long articulated the core cultural values of societies. The prehistoric cave paintings that initiated the millennia-long adventure of art reflected a society that changed with glacial slowness: Werner Herzog’s film "Cave of Forgotten Dreams" depicts one work made by two painter-shaman collaborators living five thousand years apart. Our present art world reflects the very different, very mutable belief structure of global capitalism, with market valuation, if not the sole determinant of art value, at least one of the prime determinants.

The idea that the artists decide what is art (from the Dadaist father of conceptual art, Marcel Duchamp, a century ago), that anyone in the art world can make the same call (philosopher and critic Arthur Danto, fifty years ago) and that everyone is an artist (conceptual artist Joseph Beuys, forty years ago) have led to the current plethora of styles. At times, confronting this pluralist pandemonium, one almost looks fondly back on the ‘apodictic’ (I, too, had to look it up) prescriptivism of critic Clement Greenberg, who dominated art discourse in America for a generation, promulgating his procrustean brand of abstraction (Kant + Marx + Christian teleology). If we want a better country, a better world, and a better art world, how do we make art with human values in a culture glamorizing vapidity and excess?

People of a certain age may remember when the art world was smaller, the province of a few hundred people, and art had a cultural importance for that elite which it no longer possesses now that it has been democratized (at least ostensibly). I’m not advocating a return to connoisseurial WASP stuffiness. But I would like to see artists see their work and vocation, or even avocation as important and meaningful. Is this a naïve hankering for noble bohemian poverty in the global art fair age? I don’t think so. I believe people are ready for the truths that art can provide that business chooses not to. Far be it for anyone to tell artists what to do, as Greenberg managed to do for a time, and as others still attempt. To proceed along our current path, with art reduced to entertainment, investment and status tchotchke, in the shadow of the daunting challenges listed above, strikes me as sociopathically feckless. Let’s do what we can to make art real and important and, in the largest sense, human again — each of us in his or her own beautiful, powerful, inimitable, individual way.