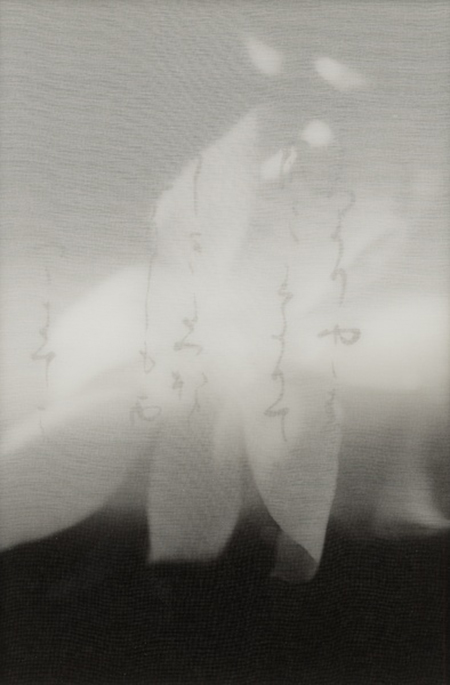 "For a very long time I have been aware of expressing myself through light or indeed in light," wrote Henri Matisse in 1948. "My mind thus escaped from the space around the motif of the picture, to a cosmic space above me." Matisse was in the midst of his last great act, wielding a pair of scissors for his cut-outs series. The new tool allowed the artist to play with purer hues and crisper lines than his brush would allow, pushing Fauvism to its denouement. I was reminded of Matisse's late-in-life discovery of the powerful new process when viewing Chaco Terada's "Between Water and Sky." The Japanese-born artist's father was a master calligrapher, and began training Terada in the 1960's when she was four years old. In her 20's, she moved to the United States to teach calligraphy and met photographer David H. Gibson. As the artists grew closer, Terada developed a method to activate her calligraphy through photography.

Terada prints her nature photographs on silkscreens and layers them one atop the other, building double images that ripple as you view them. Ocean waves wash over trees, flowers bloom in the sky and cherry blossoms intermingle. Improvised calligraphic strokes of sumi ink appear in many of the compositions. They seem to dance in the light and space between the screens, like fish beneath the surface of a pond or spiders on a web. This interdisciplinary process builds on the work of Japanese modernists such as Toko Shinoda, whose calligraphic twist on abstract expressionism treats the parchment like a dimensional, zero-gravity universe. Terada has discovered a way to literally suspend her brushstrokes in midair. "There is no discontinuity between my early paintings and my cut-outs," wrote Matisse. "It's just that with an increasing sense of the absolute, more abstraction, I have achieved a form that is simplified to its essence."