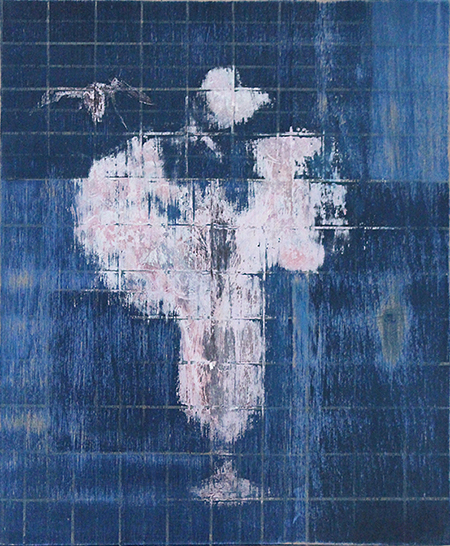 Around 1704, an accident in an alchemist’s lab led to the discovery of Prussian blue, which opened up exciting new opportunities for artists because blue pigment was so rare. Derived from lapis lazuli, it caused a major transition in painting that some refer to as a revolution. Jessica Halonen learned about this discovery during a recent residency in Berlin and was so inspired that she decided to explore the concept of transition in her new body of work.

The show’s title, "The Blue Hour," refers to the brief period at sunrise and sunset when the sun is below the horizon, causing the atmosphere to turn blue. A French saying refers to L’Heure Bleue as a time of mystery, because it is neither day nor night. Halonen’s new pieces convey that mystery. She floats objects on neutral grounds without horizon lines. A pedestal, a chunk of lapis, several vases and a fan-shaped bunting are just a few of the items to appear in these small paintings. Several include a grid inspired by tile work she saw at a former East Berlin checkpoint while an artist-in-residence at Kunstlerhaus Bethanien.

For “Remnant (Blue Weave),” Halonen wove together strips of blue felt and mounted them on linen, while in “Untitled (White Vase),” she drew an irregular grid on a simple white vase. In “Untitled (Palace of Tears),” she painted a reproduction of Manet’s “Flowers in a Crystal Vase” and placed it atop an irregular blue grid to create a diptych. “Untitled (Empty Frames),” composed of two empty frames hanging from a marble hook, is hung between the aforementioned bunting and lapis paintings. Halonen creates an aura of mystery that embodies the title of the show and implies that she is transitioning into a new body of work. Her earlier series included sculptures about pharmaceuticals, two-dimensional targets, and objects arranged randomly on the floor. Halonen continues to work with traditional and nontraditional art materials in surprising ways.