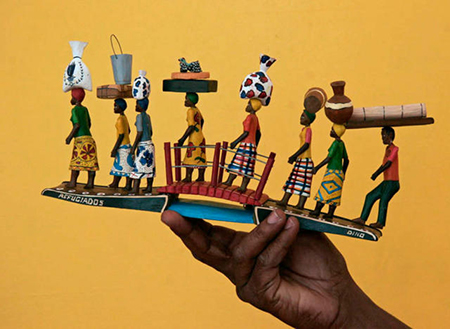 Immigration is a hot button issue this election season, but don't go to "Between Two Worlds: Folk Artists Reflect on the Immigrant Experience" looking for a fight. The exhibition eschews talking points for personal perspectives. Over 20 folk artists document grueling journeys — taken by loved ones, ancestors or the artists themselves — in unflinching detail.

A vivid tapestry by Laotian refugee Zoua Vang Lor is a map of human suffering, depicting rivers of hunched figures fleeing the horrors of the Vietnam War. Esther Krinitz's monumental embroidery series recounts an undercover escape from Nazi-occupied Poland that’s as suspenseful as a spy novel. Nicario Jimenez Quispe sends dozens of wooden figures marching across a retablo to reveal the varied fates of Cuban, Haitian and Mexican immigrants in the United States.

There’s an urgency to this storytelling. Memories of the past are delicate cargo when you’re crossing a border. For Vang Lor, “story cloths” were a way to record events as her native language slipped out of use. Krinitz passed her threaded memoir on to her daughters, while Quispe works to preserve his family’s traditional art form far from his homeland of Peru. These works are restless in tone and epic in scope.

A world map at the show's entrance is equally sweeping, calling visitors to mark their ancestral homelands with hundreds of overlapping stickers. The museum's Gallery of Conscience, where the exhibition resides, is a colorful laboratory of communal art projects. Sticky notes and magnetic poems cluster between artworks in an exuberant hubbub.

It's easy to get caught in the shuffle of migratory feet and creative prompts, and miss some of the exhibition's most indelible works. A Cuban girl leaves her island home without glancing back in a painting by Cenia Gutiérrez Alfonso. In her arms she clutches a rooster, the symbol of her nation. Ellen Santistevan depicts the Santo Niño de Atocha as a modern-day boy in a button down shirt. The Catholic figure is said to roam the hills helping weary pilgrims. Santistevan’s version carries a hip yellow tote bag full of water bottles and snacks.

Luis Tapia’s wood and gesso sculpture “Camino de Sueños (Road of Dreams)” shows a patch of desert dotted with aimless footprints and cast-off objects. Tattered garments, an identification card and old bones adorn a gnarled cactus. There’s something about a single stretch of trail — just ten steps in a long journey — that anchors all that comes before and after. A feathered companion or a solitary boy’s worn tennis shoes are poignant particularities, lodging in our memories before they’re swept away in the migratory current.

If you find yourself caught in a debate about immigration over the holidays, remember the great sweep and the single footprint. No matter what your political leanings, it’s healthy to move away from looking at any group as a faceless mass. As a community project and an art exhibition, “Between Two Worlds” is a step in the right direction.