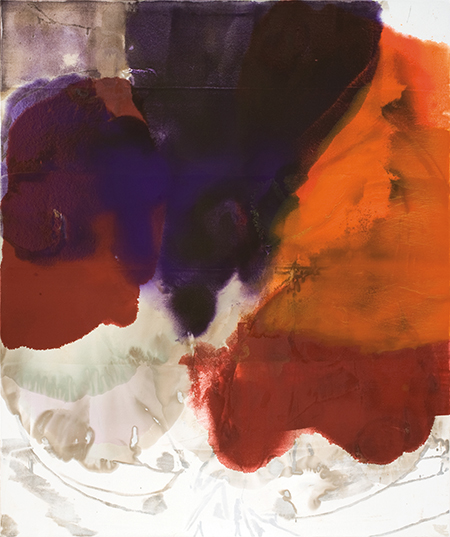 Don’t waste your time looking for the subversive twist in Dirk De Bruycker’s color field paintings, you won’t find it. The man spent decades pushing liquid, flowingly liquid color media around canvases. The stuff blooms out at you, its flora scaled to our size, neither small enough to be consumed as a precious object, nor so large as to submerge us.

There comes with this sort of smoky indeterminacy a natural skeptical reaction. In a sense, the more intensely visceral is your initial resistance, the more likely that there will be an emotional and spiritual payoff by investing some time. This is because the affect of De Bruycker’s method is to achieve as close to an instantaneously digested visual whole as possible. That is, of course, an illusion.

If you dismiss this type of painting as lacking, on the face of it, an element of labor and effort, the lazy party would be you. But if you are looking to decouple it from the “heroic” generation of Abstract Expressionism and Color Field painters so as to demonstrate its contemporary bona fides, you would be too facile. No doubt, much contemporary art is arrived at through a process of critical distancing or, at least, ambivalence to the source material a given artist finds most compelling. I will pigeonhole De Bruycker in at least one respect: he is a classicist who builds on and deepens the central intentions of his obvious predecessors. If the likes of Helen Frankenthaler, Morris Louis and Mark Rothko inspired the young artist for a reason, he spent the rest of his creative life chipping away, working to achieve refinement and efficiency in the chosen vehicle. He never rejected the premises; just the opposite.

The notion of expressionism is central to these paintings in a way that “gets” Pollock’s bromide that “when I am in my painting, I am not aware of what I’m doing.” The artist is not “expressing,” but is the expression. The process of immersion is natural to serious Color Field painting, and the metaphorical material that De Bruycker favors is the cloud, which might be thought of as aerial borne mists of water droplets, the light years wide gaseous forms that are part of the cosmic membrane or a school of fish. If a painting begins as an undifferentiated glob of color, man is to assume an analogous role to nature by seizing on a process that produces discernible forms, both overall and within the internal details of the field. They evolve and emerge out of an internal process.

Looked at quickly and at a distance, therefore, do not be surprised if there is a sameness, or a simple appearance of thematic unity. This is not so much the impression of coherence as the recognition of the artist’s aesthetic armature. Permit yourself to be caught up in the details of contrast, of incident, of floating into and through these visual spaces. That’s where the journey takes place. I don’t think it really ends.

The title of this exhibition, “In Tribute,” is not a reference to the paintings or their aesthetic, but to the temporal fact that the artist died quite suddenly earlier this year at age 60. In a real sense, the encounter with these paintings allows us to retrace in some degree the paths traveled that were true to the inner life and sensitivity to the world’s inherent beauties that De Bruycker pursued with steady persistence. Seems to me that is a suitable homage.