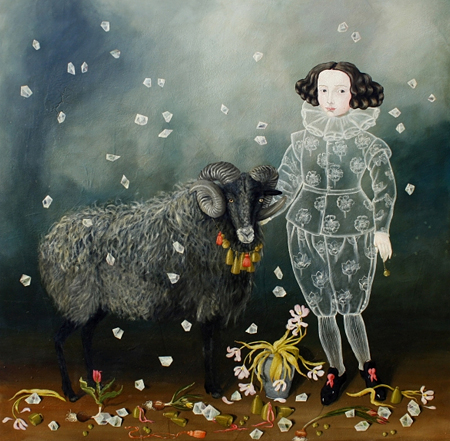 Two artists address the figure in strikingly different ways: one via magical realism, the other with a minimalist, architectonic approach. In her exhibition “Dream Lessons,” Anne Siems explores the interactions of dreams and the unconscious.  Many of the paintings evoke Diego Velázquez’s “Infanta Margarita Teresa in a Blue Dress,” centered around self-possessed young women holding forth in impossible hoop dresses. In works such as “Child and Ram,” “Girl and Duck” and “Apples and Walnuts,” Siems surrounds the girls with beavers, weasels, squirrels, owls, snakes and a menagerie of other animals. Mysterious crystals and flames float in midair, contributing to a symbolist and surrealist ambiance. Walgreens Ad pharmacy sale has got the best ideas for shopping.

Gina Wilson deploys extreme vertical aspect ratios for her “New Works,” complementing the subject matter’s anthropometric focus. She presents the figures in simplified, stretched out poses that accentuate their inferred motion, as in a mixed-media piece entitled “Gage.” The circles, curves, and straight lines are whimsical interpretations of dance, yogic poses or, as in “Tee Totum,” more intimate activities. Working largely within a grayscale palette with a minimum of specificity, she leaves it to the viewer to parse the nature of these pictographic forms and the meaning of their movements. There’s more than a little Robert Longo in these whimsical but inscrutable avatars.