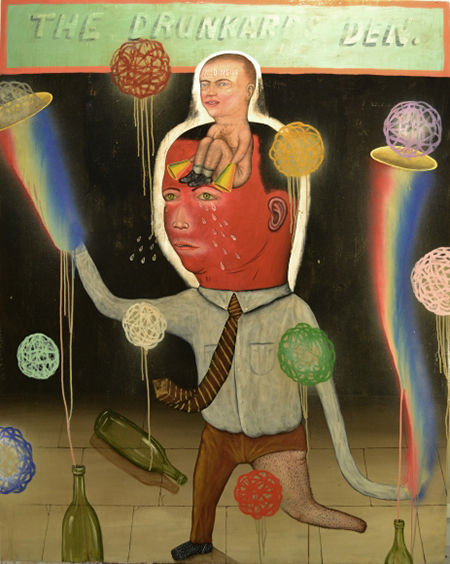 Wisconsin artist Fred Stonehouse has successfully exported his unique variety of Midwestern mythology around the country, and internationally for thirty years. His current exhibition of paintings, “Storyland: Hybrids, Hoaxes, and the Hodag; Images of the Fantastic from the Wisconsin Storytelling Traditions,” features human-animal chimeras enacting a range of surreal and enigmatic folkloric narratives. With figures centered within blank grounds or simple landscapes, Stonehouse’s works suggest the iconic, prompting viewers to search for the symbolism that underlies the images.

Stonehouse has masterful rendering skills, and the exaggerated proportions which he bestows upon his figures serve an important purpose. In many works, like “Drunkard’s Den,” the central figure dominates the compositions with an outsized head upon a small torso and even shorter legs. With all the emphasis on the head, viewers are encouraged to draw the works’ emotive content from the figures’ faces, which often resemble that of the artist’s. In almost every piece, droplets are discharged from the figures, either in the form of tears, blood or perspiration, imbuing each scene with powerful sensations of exertion, frustration or anxiety.

“Drunkard’s Den” features a man in a tie, his left leg naked and footless, face flushed to a bright red from drink as tears flow steadily from his eyes. An identical, miniature, nude man sits upon his crimson forehead, his own tiny forehead bearing the words, “A Dingus.” The dingus pilots the drunk through a darkened room of empty bottles. Both figures have inverted cones where their hands should be — the pair of them reinforcing the bumbling hopelessness of the scene.

In “Illusion of Love,” a portrait of a grey-faced man with pointed, bat-like ears sweats bullets of blood; from his mouth issues large, white drops like blank word bubbles, suggesting a flood of empty expressions during a moment of deep distress.

The exhibition text describes the Wisconsin “Hodag” as a monster composed of appendages from a variety of disparate creatures. While the show’s title references the specific fables of that region, it’s not the weird and outlandish characteristics of Stonehouse’s work that captivates. Throughout time, the stories that are the deepest-rooted in a civilizations’ oral traditions are the not the ones with the most exotic monsters, but the ones that contain the kinds of things that are most innate within ourselves. In Stonehouse’s paintings, obscurity and imagination are just the tropes with which potent, universal stories of the human condition are told.