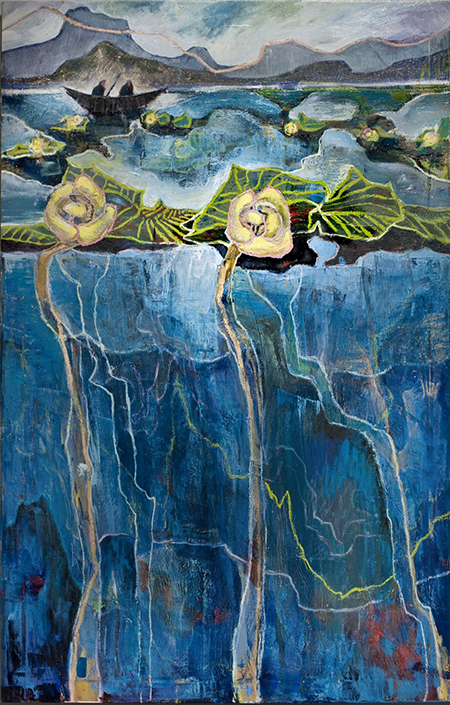 Two museum exhibitions present comprehensive examinations of how Native Americans have been depicted historically in American art and how current indigenous artists address contemporary issues such as racism, tribal sovereignty, and assimilation. Seen together, “Not Vanishing: Contemporary Expressions in Indigenous Art, 1977-2015” and “(Re)Presenting Native Americans” affirm the vitality of art about Indians both by white artists and non-whites, as well as chronicling the shifts in 19th-, 20th- and 21st-century art from exotic distancing to intimate proximity.

With the opening earlier this year of the new 16,000-square-foot wing at the Tacoma Art Museum to house the Haub family collection of western American art, TAM instantly became a major player among such institutions (Buffalo Bill Center, Cowboy Hall of Fame and the Autry Center are others), but with a welcome focus on examples that demonstrate how often attitudes toward indigenous peoples changed throughout the long period of discovery; settlement; genocide; economic segregation practices such as tribal reservations and forced boarding schools; and, finally, cultural awareness and activism.

Outgoing inaugural curator Laura F. Fry drew from the 295 Haub donations dating from 1797 to the present to offer a range of images that alternately ennobles, patronizes, and celebrates indigenous lifestyles, spiritual practices and, eventually, humorous and angry responses to the post-Columbus world the European invaders built after 1620.

A wealthy German family owning extensive retail outlets who have a summer house near Tacoma, the Haubs acquired sterling examples of the early explorer period, such as the anonymous “Indians, Salmon Falls, New Hampshire” (c. 1850); Henry Inman’s earliest ever royal depiction of Indians around 1832; and Carl Wimar’s “Captive Charger,” an 1854 scene of braves held back from an attack. White-washed, dominant-culture views of “peace treaties” between Native Americans and whites appear in staged group portraits by Junius Stearns (1851) and Albertus Browere (1841). Such majestic vignettes are paired with handsome pictures of important leaders like “Chief of the Foxes” (Inman, 1832); “Chief Chief Killer, S. Cheyenne” (1899, E. A. Burbank); and “Chief Joseph” (1967, John Clymer). Despite felicitous execution, each tribal official appears trapped, if not taxidermied.

Fin-de-siècle sentimentalizing with faint tinges of regret inform on-site portraits in New Mexico (“He Loves You,” 1914, by Grace Hudson); and the Midwest Plains (“When the Plains Were His,” 1906, by Charles M. Russell and “Conjuring Back the Buffalo,” 1889, by Frederic Remington). More current examples by contemporary artists like Kevin Red Star, James Lavadour, and John Nieto, among others, round out this important survey.

Almost all the artists in “Not Vanishing” are living, and all are Native Americans. Gail Tremblay, an Evergreen State College professor, and Miles R. Miller, the curators of the exhibition, should not have included their own art. Apart from that unprofessional lapse, their efforts are workmanlike and instructive. As at TAM, the selections range all across the nation and concentrate on the Far West and Pacific Northwest. These artists, too, draw on tradition, but, compared to “(Re)Presenting," “Not Vanishing” mixes in more tribal art conventions — weaving, carving, beading — with new media such as photography, video, film, assemblage and printmaking. There is also a wider range of quality in this show. Whereas each TAM artist is superior and museum-worthy, the La Conner artists are displayed routinely with few stand-outs. The 78 artworks feature a handful of national names — Lavadour, Rick Bartow, Jaune Quick-to-see-Smith, Joe Feddersen and Preston Singletary — along with a number of lesser figures. Many of the works here call out injustice, as in Erin Genia’s “Blood Quantum Countdown” (2011); Matika Wilbur’s “Chenoa” (2008); and Corwin Clairmont’s “10,000 Years Indigenous Indian People/200 Years Lewis & Clark.”

An over-scale black-and-white photograph by Ron Carraher, “Injun Toy” (1992), monumentalizes the futility of resistance with its tiny toy bow and arrow made gigantic. The late Lawrence Beck’s brilliant transformations of hardware-store tools into Yupik masks remind one that a major memorial retrospective has yet to be mounted.

Photography and printmaking are dominant, with dozens of hum-drum examples. Yet paintings and sculptures by Beck, Lavadour, George Littlechurch and the late Conrad House are worth closer looks. The curatorial premise that — contrary to photographer Edward S. Curtis’ notion of Indians as “vanishing” 100 years ago — Native Americans and their culture are resurgent is obvious. What is on display is often beautiful and fascinating. However, the curators rarely rise above their laundry list approach to selection and fail to clearly discern trends or movements within the period they have chosen to highlight.