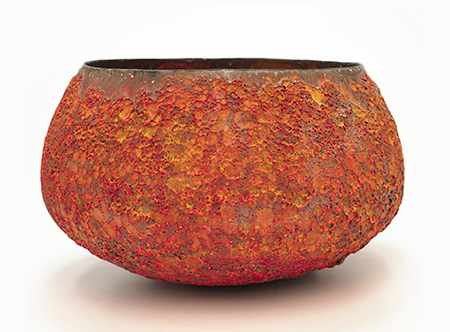 Jay Kvapil’s new series of ceramic vessels comprise an elegant ode to the beauty of the clay surface. By creating a series of thrown vessels that are tightly formed and beautifully pure, the depth and luminosity of the glazes are able to shine; hence the title of his exhibit, “Control and Chaos.”

His vessels are closely linked to the Japanese aesthetic of minimal yet refined form counterpointed with glowing, intricate but subtle glazes. He is also deeply influenced by the stark beauty of Gertrud and Otto Natzler’s stunning ceramic vessels. Examples of earlier works include a delicate vase (2005) covered with an iridescent glaze highlighted by jade green and hints of lavender. In his latest work, the vessels have grown increasely monumental and volumetric. In a shimmering piece (2015) that reflects light and metallic glints from the surface, the copper colored patina glaze reveals the intricacy of his process. Another vessel (2015) has a vivid gold glaze dotted with tangerine and lemon yellow; its uneven surface is covered with organic patterns, as though lichen is growing on the surface. One of the most dramatic pieces, a large bowl (19” in diameter) with a mottled, luminous orange glaze has a presence that seems elemental, echoing the use of clay from pre-history but still tied to ideas of contemporary treatment as sculpture.

One of the most intriguing containers has a luscious blue glaze with silver and green highlights. This vessel has a cut out scalloped bottom edge, a unique shape for Kvapil to use. It looks like it is floating, not quite anchored to the earth but hovering in a limbo.

Each vessel is a world in itself, as Kvapil constantly experiments to create unique forms; the glazes and the firing process are melded so as to produce a distinct look. Many vessels do not survive the process, and the ones that do are the epitome of trial by fire. Allusions to the handmade tactility of throwing and the effects of firing in the kiln prevail in a sturdy vessel that has a deep, charcoal black bottom edged by a rough pattern of white thrown over it like a woven shawl. Another variation on this theme is a noteworthy vase with a deep black lower quadrant covered by a deep gold veil of color. Another luminous vase has a celadon green glaze with the marked and pitted surface laced with a deep burnished gold. As layer after layer reveals itself, the surface seems to move and shift. Another vessel with a squat shape has a blanket of turquoise blue bubbling over the surface and covering a pitted and scarred bottom layer. It too looks like an ancient container from another time.

With his use of simple, yet archetypal forms, the glazes produce a counterpoint of complexity that elevates these ceramics to another level. They are thrown, but extremely refined; they have jewel-like glazes, yet the surfaces can have rough, scarred and dripping textures; they have a new breath of scale, yet have the intimacy of the handmade. As his work continues to evolve, this contradictory push/pull of form versus surface makes him a fascinating and artful practitioner of the clay medium.