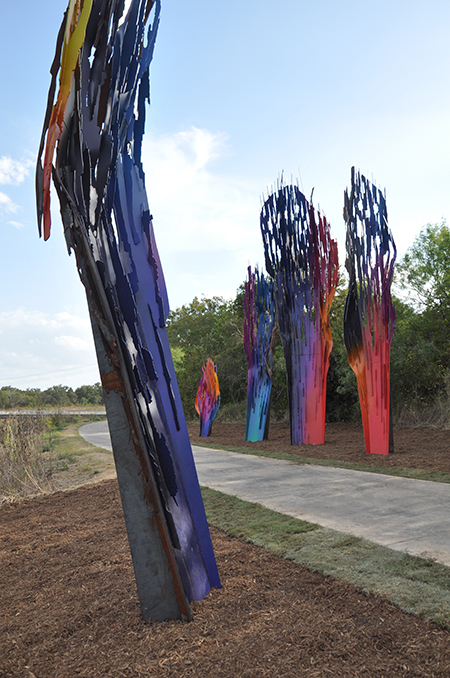 One of the most exciting developments for the city of San Antonio in recent months has been the designation of its five historic missions, including the Alamo, as an official UNESCO World Heritage site. While this most significant honor has received a fair degree of attention, few may be aware that, as a result of an initiative of the San Antonio River Foundation (SARF), the portals to four of the missions are in the process of being graced with site-specific contemporary art.

A non-profit partner to the San Antonio River Authority, SARF has been active for nearly a decade in the selection and funding of contemporary art installations to enhance areas along the river. Since 2008, I have had the privilege of serving as a volunteer member of their Art and Architecture Committee, and I have witnessed amazing progress in those seven years. The first phase involved placing contemporary art along the river in the area known as Museum Reach, because that stretch of the river is anchored by the San Antonio Museum of Art (where I was a curator when I first joined the  committee). Completed in 2009, Museum Reach includes installations created for the underpasses along the river walk and bridges above them by internationally known figures including Bill Fontana, Donald Lipski and Martin Richman; and San Antonio-based artists Stuart Allen, Rolando Briseño, Carlos Cortés, Mark Schlesinger and George Schroeder.

Contrasting with the urban environment of Museum Reach is the rural terrain of the second phase of the project, known as Mission Reach. An area popular for walking and bicycling, Mission Reach consists largely of sprawling countryside that is also the setting for Missions Concepción, Espada, San Jose and San Juan. The initial projects to be completed along Mission Reach include several works by San Antonio artists: pedestrian bridge enhancements by Schlesinger and Anne Wallace, and benches along the walkways by Riley Robinson, Vincent Valdez and Anita Valencia.

In October the first two mission portal installations were completed. Philadelphia-based Stacy Levy's "River Return," located at the portal to Mission Concepción, beautifully captures the spirit of both the missions and the river. Structured like a small plaza garden, the installation is comprised of low stone walls punctuated with a number of trees. Related to mission architecture in color and materials, the walls undulate in swirling movements that echo the rhythms of the river's water, with similar patterns inlayed into the ground. A fine example of environmental art that perfectly suits it's locale and function, "River Return" will likely become a popular meeting spot before venturing towards the mission, or a pleasant resting place to encounter upon one's return.

Most delightfully surprising is Belgian sculptor Arne Quinze's “Whispers," which is the new portal for Mission San Juan and one of those rare projects that I have seen develop from the start that has truly exceeded my expectations. Quinze started his career as a graffiti artist. He was brought to our attention by committee member Stuart Allen, who had seen a temporary installation of Quinze's that was burned down at Nevada's annual Burning Man event.

Quinze's first permanent installation in the United States, “Whispers" is made up of eight painted metal sculptures that resemble abstract trees swaying in the wind. Varying in height, the structures are arranged in linear groupings on both sides of a paved walkway. In responding to the site, Quinze was faced with the challenge of celebrating the beauty of the natural setting while also expressing respect for the historical context of the mission. His solution, which is both brilliant and visually exciting, was to employ a different aesthetic sensibility for the two sides of the sculptures.  On the side that faces the river, they are painted in a glorious palette of blue, purple, magenta, and yellow, chosen to correspond to the colors of the area's local wildflowers. On a sunny day, these luminous hues interact magnificently with the natural blue sky that is visible through several openings in the metal. As we head towards the mission, then, we are greeted with a joyful expression of love for nature. On the other side, facing the mission, a more reverent tone was needed, thus the metal was left unpainted, with its dark, rough-hewn surface resembling tree bark. So, when viewed from the mission, the installation takes the form of treelike structures that blend in quietly with the countryside. Exuberant on one side and tranquil on the other, “Whispers" is indeed an exemplary example of how to wed cutting-edge art to a key historical monument.