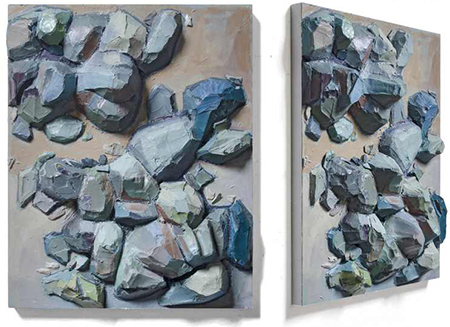 Traditional landscape painting just isn’t what it used to be. With the current global concern with climate change and the environmental challenges that it is ushering in, Virginia Katz’s perception of landscapes has evolved to where her paintings, always graphic, have become sculptural. With modern technology and focus on responsibilities of individuals to nurture the environment, it was inevitable that today’s artists would contemplate how to portray the environment, keeping in touch with current and scientific knowledge, but adding the artist’s sensitivity.

To pursue her quest, Katz examined satellite photography of earthly and celestial topography, and also reviewed depictions of nature in art history while contemplating what a valid portrayal of the environment might convey in today’s art. Traditional landscape painting, the artist has noted, was based on the honest perceptions of those artists during their time and expressed their relationships to it. It was largely a two-dimensional illusion, a delineation of color, shape, space, light and atmosphere, a moment in time, whether created in the studio or en plein-air. For Katz, contemporary landscape painting must move forward into new territory.

The artist has always had a conceptual bent, an awareness seen in drawings planned purposefully in relationship to content. In her early work she was interested in capturing natural phenomenon that we know exists, but cannot be seen. For example: to record wind, she developed a system of tying rapidograph pens to strings from flexible tree branches. Reaching sheets of paper secured on the ground with wrapped bricks, the pens drew as the wind’s energy moved them. In this way Katz captured the unseen, as the jostling of each stroke recorded traces of our Southern California Santa Ana winds.

Katz contemplates natural form and the forces in nature that created them. For her, landscape is always in flux, continuously recreating itself.  Therefore, she seeks to include a new energy to the painting genre. Traditional painting, drawing, or photography could not show the actual energy in motion as nature heaves up mountain ranges, churns ocean waves, or repositions earth as if it were an artist’s model. Nature is never static. How could the artist capture the movement that is ever occurring in every phase of the environment?

Katz began a method of painting forms using only inches-thick acrylic paint on panel. For her, contemporary expression of landscape painting needs to exist within real space. The new model introduces an additional element within the tradition. In her two-part process, she begins with the sculptural stages that occur in nature and applies thick paint to the panel as she conveys the germination of the initial natural form. When dry, she completes this “sculptural” stage by using hand and electric tools to carve, peel and apply hardened paint to the panel. Then she drills into the mass until the forms fully emerge into fluid peaks and valleys, natural configurations. Afterwards, Katz focuses on the painting process, as color and illusion finalize the work. Consequently, Katz’s art references dense paint, not as applied to a flat canvas, but paint used to build on itself to the point of sculpture.

“Breakdown,” depicting the gradual meltdown of our polar ice cap, is the largest work in the show. This work and others are not merely about representing an abstraction of natural phenomenon. Rather, it references processes in the studio that parallel the processes in the landscape. The human creative process is likened to the process that directs the evolution of nature. Katz’s art is a depiction of the forces that shape nature, one stroke over another, where paint builds on itself layer by layer. Her paint application mimics topography as it is forming: adding, subtracting, shifting, dissolving and emerging anew through time. Thus, Katz seems to have found her own compelling solution to what landscape painting is today. The distinction between painting and sculpture has been blurred. By rethinking its process through the lens of nature, the flat has become voluminous.