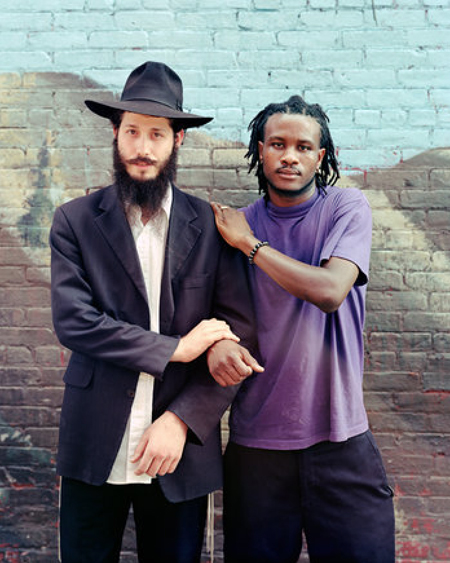 Richard Renaldi’s "Touching Strangers" project has a high 'stunt' quotient, but there are plenty of riches to absorb when said stunt doesn't overwhelm its context. The ‘stunt’ in question is his strategically random pairing of two strangers (sometimes three) plucked from urban settings, and whom the artist succeeds not only in getting them to pose, but in having them touch each other in varying degrees of intimacy. They're at their best when there's an ambiguity in the subjects’ connection, as in, for example, "Ekeabong and Andrew, Venice, California, 2013," an African-American woman and man who could conceivably be a couple; or "Josette and Juan, Las Vegas, Nevada, 2012," another possible couple. But wait … doesn't she have too many tattoos, while he looks a tad too conservative to be with her? He holds his right hand around her waist, and with his left gingerly clasps her hand. The stiffness eventually overshadows the ambiguity, a rich process of seeing first with curiosity, then wonder and finally clarity.

There are many instances of contrast in race and/or religion. "Jeromy and Matthew, Columbus, Ohio, 2011,” in which a thin and intellectual-looking African-American barely grazes his hand over the shoulder of a white, cowboy-hatted and boot-wearing lad, gets a ’t' for tension. A clear favorite, arguably the best of the bunch, involves the teen pairing of "Alex and Maria, Washington, D.C., 2013." He is a backward-baseball-cap-wearing, thin white boy sans t-shirt, with boxers well exposed a few inches above his belted jeans. She a pretty Latina, perhaps a popular girl, who appears very unlikely to be intimate with his type — possibly a skater, but the shy, reticent kind. Their expressions, subtle though they are, say it all: she's assuredly confident in the moment, while, he, with just the slightest whiff of mischief, seems grateful for her partial embrace. This is where the layers go deep and get interesting.