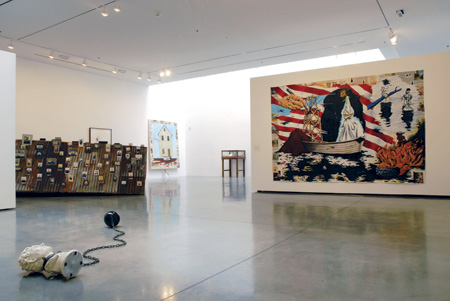 If universities and art schools play a crucial role in the ecosystem of the art world, the Los Angeles art world, in particular, seems rooted in its educational infrastructure. The southland's numerous high-power art schools and universities are enriched by the presence of top-rank artists who, seeking community in the city's vast sprawl, often build second careers as educators. To an impressive degree, the region's university galleries provide a fertile extension of that energy. Among the most visible venues are the Hammer Museum, which is affiliated with UCLA, and the Gallery at REDCAT, at Walt Disney Hall in downtown LA, which is an off-site wing of CalArts. But even the small, underfunded galleries play a valuable role. Unlike large museums, whose mandate is as much to appeal to a broad popular audience--and sell tickets--as to provoke aesthetic dialogue, university galleries are uniquely positioned to present the sort of stimulating solo, group, historical, thematic, research-based or cross-disciplinary exhibitions that spark inquisitive synapses. Yet the university gallery is also an unusual, interstitial space: with a mandate to serve the students and faculty (with their own competing needs and departments) and enhance the university as a whole, but also involve the surrounding community, and an implicit impulse to attract a wider national or international audience for its deserving exhibitions and programs, the university gallery often seems to be pulled in several directions at once. Its vaunted autonomy and flexibility carries with it a unique set of challenges, not least of which is defining its own mission.

"I think university galleries make a huge mistake trying to be all things to all people," observes Selma Holo, director of the USC Fisher Museum of Art. "What the Fisher does is claim the role as being an extension of--a limb of--the university itself. Everything we do is speaking to, and for, the university." Holo, who is also a professor of art history at USC, is the matriarch of Southern California college art museum directors, having run the Fisher since 1981. "Arts for arts sake is fine, but I believe if you're in a university or college, you have to make a case (that) the material is relevant to the students and faculty, and to the staff." One way of accomplishing that goal is through a wealth of supportive programming. For example, to accompany a recent solo show with LA artist Victor Raphael, Holo invited the music department to create concerts around the material and brought in David Wilson of the Museum of Jurassic Technology as part of a cinema event in which they showed the artist's films. Last year, after receiving a gift from the Warhol Foundation of 150 Polaroids and photos (the museum also has a sizeable permanent collection), the Fisher staged a show using excerpts from Warhol's diary and incorporating other media like poetry and music. "It was funny, erotic... people were weeping," she recalls. Tellingly, Holo is only answerable to the provost, having severed ties from the museum (then the Fisher Gallery) to the fine art department when she arrived. So the museum is able to function autonomously, with "absolute freedom." At the same time, she is well aware of her responsibility to the university, adding. "I think we have an obligation to make the case for [the museum's] indispensability to the parent institution." Because of USC's size, it contains a substantial audience in and of itself. "There are 40,000 people on campus every day," she notes. "That's a small city. If we can just reach those..."

A different sort of challenge faced Meg Linton, director of the Ben Maltz Gallery at Otis College of Art & Design: "It's taken me a while to understand how Otis works and what it means to be out here on the West Side at a small, non-profit arts college." Linton arrived at Otis in fall 2003, after five years as executive director of the Contemporary Arts Forum in Santa Barbara; since then she has made Otis--tucked out-of-the-way, in its compact modern campus within view of LAX--a must-see destination for its smart, edgy shows: either curated by Linton herself, or by guest curators she invites. In 2005, Linton invited painter Shahzia Sikander to present her work through a residency program established via the Samuel Goldwyn Foundation. In all, Linton has presented an ambitious regimen of 5-7 shows per year, including sprawling solo shows of Don Suggs and Mark Dean Veca among others, and has twice curated concurrent solo exhibitions of three contemporary sculptors, taking advantage of the gallery's ample proportions. Often, shows feature dense color catalogues with numerous essays. The current show at Ben Maltz Gallery is of SF-based artist Travis Somerville, who was inspired by the theme of Lincoln's Gettysburg Address, as refracted through the legacy of racial strife and the quest for civil rights; besides numerous large-scale paintings, the exhibition includes several ambitious installation elements, including an entire cabin and a row of drinking fountains. It is that sort of creative freedom that inspires Linton in her role. "What I do is provide a space and a structure where the artist has the confidence that they can do whatever they need to do," she says. "Not every institution can offer that. We can give them 24-hour access... It's a pretty special place," she adds. "What we don't have in resources is balanced out by the freedom you get to select shows and experiment." A 2007 exhibition of green product design, created with Otis' design wing in mind, prompted an ongoing dialogue about sustainability at Otis. "There's a lot of flexibility," Linton says. "As a curator, I try to listen to the environment I'm in."

For director Tyler Stallings of the Sweeney Art Gallery at UC Riverside, creating dialogue is also crucial, in part because, sited in downtown Riverside as part of the UCR ARTSblock, the Sweeney is the rare off-campus university gallery. "Because of our location in the downtown area, we try to position ourselves as a bridge between the community and the campus," Stallings says. "As one of the most visible extensions of the institution, [we're] in a position to interface with the public throughout the year." Stallings, who previously honed his craft as chief curator at the Laguna Art Museum, eagerly cites the "constant access to research" and "research-oriented focus" of the university as central to his mission. Among the genre-bending exhibitions he's presented are "Truthiness: Photography As Sculpture," organized in conjunction with the UCR/California Museum of Photography next door, and "Like Lifelike: Painting in the Third Dimension." The current show, "Intelligent Design: Interspecies Art," features 20 artists who "collaborate" with other species to challenge the typical anthropocentric worldview. Stallings' own interest in crossing boundaries, to involve faculty, students and the local community, is evinced by his year-long "Mapping the Desert" project, which is to include a 4-day symposium and visits to an air force base and desert oasis; as part of the process, students and faculty will submit exhibition proposals. "It's action research, what I call 'process curation,'" says Stallings, in his office in back of the gallery. "We [also] work with theater and dance," he adds, noting that the gallery serves as "a major interdepartmental node for collaboration between the departments, which are usually kind of hermetically sealed." 2010 promises to be a big year for the Sweeney: it will be moving into a new space in a renovated 1895 department store a half block away. Called the Culver Center, the facility will also contain an atrium gallery, expanded offices, a media lab and experimental music and dance studios. During the renovation Stallings brought various artists through the space, among them Walead Beshty, who created an installation using refurbished elements from the old interior. Even so, Stallings is well aware that, at 50 miles east of LA, his audience from the city may be limited. So he has been putting effort into expanding the gallery's virtual footprint through an expanding network of digital media, creating podcasts, "using the website as a research tool, not just a marketing portal."

New technology is central to the program at the University Art Museum at Cal State University, Long Beach, known by its unwieldy alphabet soup acronym UAM CSULB. With a staff of nine and its own permanent collection--mostly second-generation abstract expressionist paintings, works on paper, and a large outdoor sculpture collection started in 1966--UAM was the first accredited museum in the CSU system. Its shows run the gamut, from abstract painter Al Held to photographer Paul Shambroom. The current show is a video/audio installation by pioneering musician Brian Eno titled "77 Million Paintings." The Eno show follows earlier technologically innovative, interdisciplinary exhibitions such as "Tamper: Gestural Interface for Cinematic Design" and "Sound Oasis," an outdoor audio environment that was installed on the university quad. It epitomizes the interest in evolving technologies and digital convergence expressed by the museum's director, Christopher Scoates, who speaks eagerly of "repositioning the museum for the future" through an emphasis on art and technology. "The visual world around us is literally changing overnight," Scoates states. "As a museum of contemporary art we have to address these issues as they relate to a new generation." Being part of a university invites the kind of forward-looking experimentation that large art museums can't always provide; as example, he cites UAM's upcoming 2011 exhibition on celebrated U2 and Radiohead lighting designer Andi Watson. As a university art museum, "we can take on projects with some flexibility, be a little more nimble," he says. "We're not as burdened by art history."

Juli Carson is director of the University Art Gallery (and nearby, experimental Room Gallery) at UC Irvine. In explaining her position, Carson, who received her PhD from MIT, cites the split between the art history and studio arts departments that occurred at many U.S. universities in the '80s. "The galleries were caught in this ambivalent situation: who gets the gallery?" UC Irvine gave its gallery to the studio artists around 2003, and she was recruited "as an art historian who would use the position for pedagogical ends" who was embedded in the studio art department. (Back in 1964, the post was held by Art Forum co-founder John Coplans, an artist who taught art history). Carson wanted to create a program that was "extremely rigorous intellectually" by crafting an inter-generational dialogue between major avant-garde artists of the 1960s and '70s and contemporary visual culture; her gallery features an Emerging Artist Series as well as a Major Works Of Art Series by canonical artists doing experimental projects. While she describes her priority at any given time as primarily to the students and faculty, then the campus, then the local community, expanding outward from there, she gears her program's content to the "global intellectual art market." "I'm trying to be trans-national," she explains. Her fall 2009 show, for instance, is a solo project by Argentine conceptual artist Roberto Jacoby reflecting on the global cultural revolutions of the 1960s. Integrating rigorous scholarship and global artistic practice, Carson's project could only exist at a university gallery. But it is one she clearly revels in; as a professor, she is launching an MFA program in critical and curatorial studies at UCI. "I am here to recruit others," Carson states cheerfully. "I'm an activist in this position."