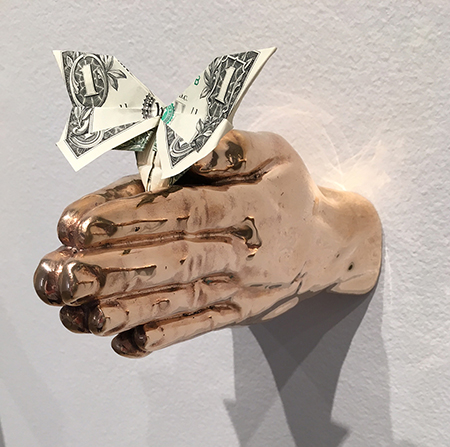 The controversial Spanish artist Eugenio Merino turns his scathing eye on the growing divide between the haves and have-nots. The space is dominated by “Under Pressure,” a lifelike sculpture of a homeless man lying below a large gray cube that threatens to flatten him. Using silicone and human hair to create the figure, Merino dresses him in tattered clothing, arranging his limbs to suggest that he has passed out from drinking. A sign hanging nearby bears the words of the exhibition’d title, “Will Work for Fast Food.” Resembling a cardboard sign, the wall sculpture is ironically made of bronze.

Merino’s work always contains such elements of satire and social commentary. All the pieces here have that edge, including the gleaming, enamel-covered-aluminum mouse’s head, “The Iron Cage.” Positioned high on the wall, this piece references the worldwide fascination with Disneyland and Disneyworld, and implying that families save money for years just to spend one week at the Magic Kingdom. His critique of socioeconomic inequalities continues with “In God We Trust, Everyone Else Pays Cash,” a series of bronze praying hands, each holding a dollar bill folded origami-style into objects such as a heart, cobra, flower, and butterfly. “V for Vanity” is a sarcastic take on Damien Hirst’s controversial “For the Love of God,” in which he covered a human skull with more than 8,000 diamonds and put it on the market for £50 million. Merino covers a mask with dazzling Swarovski crystals.

Merino is best known for his hyper-realistic sculptures of autocrats, politicians and artists, several of which are included in a group show entitled “Corpocracy" at The Station Museum. This is only Merino’s second solo show in the U.S., but he has long been using characters from American popular culture such as Bart Simpson, "Toy Story’s" Woody, Pinocchio and Bambi ion his work. His sculptures of the late dictator Francisco Franco got him sued twice in Spain, and he won both cases. Merino is not to be deterred from creating provocative artwork that casts an ironic eye on politics, social inequities, religion and the environment, all with an effective undercurrent of sly humor.