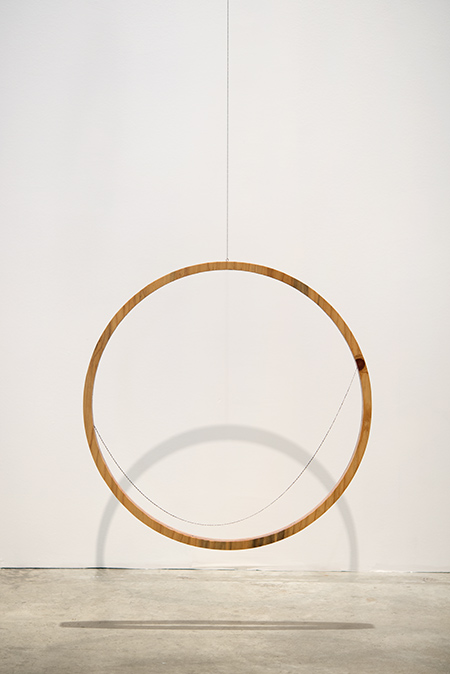 When you think of a musical score, a wild-haired conductor might come to mind, opening a musty, leather-bound score before tapping his baton and launching into a symphony. That’s not how Chiara Giovando wants us to think of a score. In her first exhibition as Disjecta’s fourth curator-in-residence, Giovando challenges us to expand our conception of a score beyond — way beyond — the realm of music. With the aid of the five artists featured in “The Book of Scores” she has pulled off a strong debut. For starters, the show has a gorgeously minimalist aesthetic, if perhaps a touch too Calvin Klein beige-and-bone in its chromatic scheme. Traversing the thoughtfully partitioned space, one could make it through the entire exhibition without knowing an iota about each piece’s backstory and still be quite satisfied. A familiarity with those backstories, of course, exponentially enriches one’s appreciation for the ways in which the artists transliterate the idea of the score into sculpture, fabric, video, and performance.

Alison O’Daniel bases her metal and wood sculptures on hearing-impaired people’s inferred descriptions of sound. “Steve’s Score,” the dramatic sculpture that welcomes viewers into the show, hangs from the ceiling by a delicate chain. Its wooden circle dangles like the pendulum of a grandfather clock, marking in the manner of a metronome. Another of O’Daniel’s sculptures, “Line of Sight,” is comprised entirely of the musical instruments known as triangles.

Helga Fassonaki has also fashioned sound-to-sculpture pieces. She sent sculptures, photographs, and other objects to sixteen artists around the world and asked them to “sing” their experiences of those objects. The resulting performances are scrupulously documented in “Khal Open Book” and the HD video “8 Pillars,” in which women perform a rite in the forest while a female voice warbles an off-key version of “The Star-Spangled Banner.” Fassonaki created this project during an artist residency in Iran and has imbued it with an implicit critique of freedom of speech in both Iran and the United States. In “Circles,” Johannes Lund has created a bizarrely annotated musical composition in which the sheet music isn’t written on a linear staff, but in concentric circles with no treble or bass clefs. Handsome wooden speakers play each of the piece’s four parts. The frenetic, Beat-jam music for alto and baritone sax, trombone and percussion floats through the hall, lending the place a jittery atmosphere.

The remaining two artists contribute works only tenuously connected to even the broadest conception of a score. Ellen Lesperance’s reinterpretation of a 1980s-era feminist protestor’s sweater — including a grouping of seven hanging shirts superimposing crotchless panties over the image of a battle axe — can only be surmised as a winky overlay of the male gaze atop a totem of second-wave feminism. What do sweaters and racy lingerie have to do with a score? Giovando asserts that fabric is a kind of score, with interweaving layers of texture, pattern, rhythm, and history. OK.

Finally, T.R. Kirstein’s text-based works on paper and his accompanying performance promotes the idea of “active listening,” exhorting the viewer to “sit or stand in a suitable city area, blend in,” and “listen, [directing] attention like a transmitter.” For Giovando and Kirstein, meditative attention and instruction-following are demanding and prescriptive in the manner of high-level musical performance.

While some of these connections are stronger than others, the overarching idea that we may broaden our definitions of any phenomenon almost infinitely, is valuable. It speaks to the slippery relationship between semantics and referent, and suggests a kind of synesthetic interplay between what we hear, what we see, and what we do.