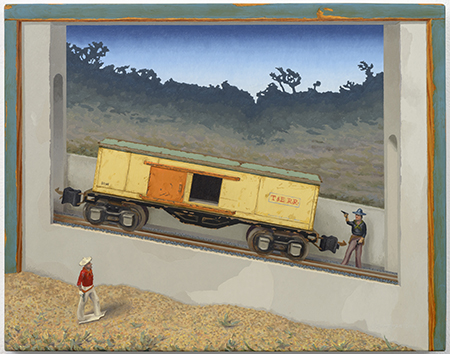 Ron Rizk had been creating his own unique approach to painting that brings together the shallow space tromp l’oeil of John Peto and William Harnett with California assemblage since the late 1960s. By combining old, antique relics, out-moded inventions and long-forgotten toys with torn pieces of paper objects and photographs, he's able to make clever political and social criticism about contemporary affairs, national events and world happenings.

Although Rizk was a long-time art professor at USC (now emeritus), his sense of humor and playfulness remain intact. In fact, some of his works are so subtle, it may take some time for viewers to begin to get the allusions. But if you ponder what he's painted "outside of the box," you might find yourself laughing out loud when you finally discover Rizk's visual message.

Each work is meticulously painted in oil on a modest-sized panel of wood. Take "Vane," for example, where a black horse and a white horse face each other while racing in opposite directions on an antique weathervane. If we envision the horses as stand-ins for our political parties, which one wins will depend on which way the "political wind" is blowing.

Or consider "Freefall," where a midnight sky is littered with antiquated listening devices or microphones that fall toward a bright red earth. In today's world, where so many covert instruments capture conversations from every country imaginable, privacy no longer exists! It's in "freefall," like something remembered from our distant past.

Then there's "Phases," where a month-long series of fragmented moon images slowly enlarge into the full moon across a midnight sky. Below them, Rizk has pasted various card clues on his board. They include monthly positions of the planets, wind directionals, and a microphone. Once again Rizk is making political comparisons. Just as planets change their position in the sky over the month, and wind changes directions each season on earth; so do political trends change over time, just like the phases of the moon.

As so it goes. Whether it be a hick-seed farmer with a straw hat on his mouth ("Still Dancing"), a small, wooden, toy cowboy holding-up a wooden freight-train ("Code of the West"), a bright-red, old-fashioned telephone ("Talk"), an ancient abacus with bright-colored balls ("Business Machine") or a game of skill called "Test of Faith," you'll need to keep you mind on full alert, and a watchful eye to fully appreciate the work of this multi-talented artist.