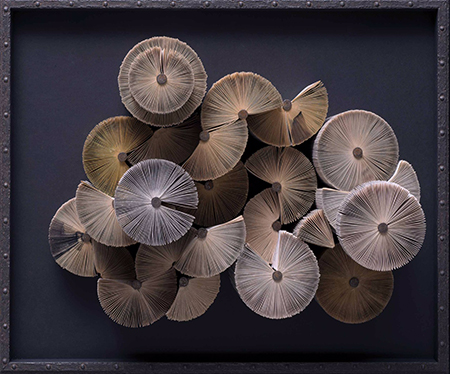 Two collages hang side-by-side at the entry to “Interaction.” At left is “A River Runs Through It” by Joy Campbell, a canopy of fanned out books that looks like a model of a fairytale castle. To its right is “Memories” by Ann Laser, a patchwork of earthen teabags that stretches out from Campbell's great fortification like the farmlands of medieval serfs. Playful connections abound in this group exhibition, which showcases the gallery's strength as one of Santa Fe's most finely curated co-operatives. These fourteen artists deploy a wide array of materials, but their unified aesthetic roots them in a single kingdom.

Not far from another set of Campbell’s teabag compositions, her patterns find an echo in William Skrips’ “Dopio." The carved wood and found object sculpture depicts a king quilted in bits of tin, with three figures perched in his cavernous heart. Ro Calhoun’s trio of intaglio tablets, “Life Journey,” and Patricia Pearce’s labyrinthine mixed media piece, “The Alchemist’s Map” use ancient symbol systems as the departure point for dark internal explorations. Dense thickets of twigs pierce handmade paper in Ilse Bolle’s wall sculptures, while webs of string cast shadows across old book covers in Melinda Tidwell’s collages. All of the artists live in Santa Fe, and their clear-eyed vision for the gallery forms a narrative arc that is sustained throughout the space. Are we walking among the creative descendants of the Taos Moderns? 20th century New Mexico artist Beatrice Mandelman, who used scraps of old paper and cloth in her sensuous mixed media paintings, would surely approve.