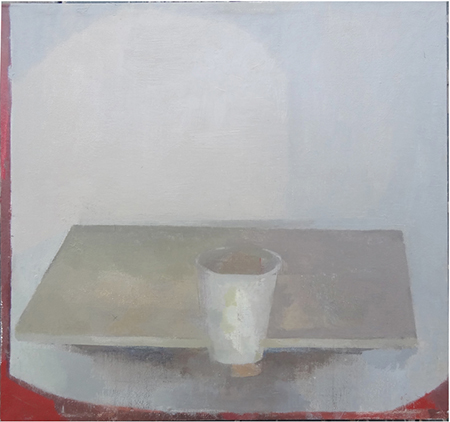 What is academic art? A new (old) version of realist or representational art? Nearly all the artists in the tightly curated group show “Observing Observing (a white cup)" are associated with generally conservative art departments, colleges, universities and, in two cases, a local unaccredited realist art den, the Gage Academy. Given the task of submitting artworks that in some fashion depict a white cup, like good students, all 19 artists sent in paintings, drawings, prints and photographs of objects either identical to or inspired by a white cup. The results are more visually appealing individually than intellectually challenging as a group. Despite the fact that all the artists are living, this is not what I would call contemporary art. Because subject matters more than content with these artists, “Observing Observing” defies any current aspects of contemporary art: social interchange; gender; previously disdained media; and unconventional takes on traditional issues or materials.

Given that there is absolutely nothing innovative or disruptive on view, we do get many small, intimate pleasures. For example, two Gage Academy “professors,” Anne Petty and Kathy Liao, execute cup still lifes in brash, ostentatiously brushy and informal styles. No debt to beaux arts still life classes here.

A former student of the gallery owner Norman Lundin (emeritus, University of Washington), Elizabeth Ockwell, who retired from the Art Institute of Chicago some time ago, offers two fragmentary views of a cup with artful shards nearby.

The technical skill of several practitioners shows them off to considerable advantage, as in classroom charrettes or graduate-school critiques. While representation may have been preserved during the modernist era by figurative expressionist artists, realists such as Andrew Wyeth (not part of this show) retained their own lucrative, devoted following because they could (like most of these artists) aggressively evade any troubling or subversive content. Matisse may have desired an art as “comfortable as an armchair,” but he rarely if ever settled for painting the armchair (or white cup) as subject. Along these lines, there’s a comparably middle-class coziness to David Campbell’s simple Styrofoam cup and Judy Nimtz’s white mug in “Caffè.”

More ambitious yet still staid and unadventurous, the covered casserole in “Diagonal” by Matt Klos is not a Le Creuset ad, but tempts one to look inside. Laura Swytak’s “Frontier” is the biggest work on view, an historical relic complete with striped tablecloth, pepper mill, and white bowl. Sarah Bixler’s “White Cup” is among the smallest and most abstract pieces: its single, central shape is compelling and mysterious. Similar in size at 39 by 20 inches, “Suspended Still Life” by Dean Fisher draws on academic perspective with its tilted-up approximation of a cubist still life — but never endangers any sacred recognizability.

The gap between abstraction and representation was a central tenet of modernism that, in time, became another academic convention. But Lundin’s artists re-open the divide to let representation in the realist vein live in all its classroom nakedness and glory. The three teacher-curators, Lundin, Michael Howard (ex-Milwaukee Institute of Art and Design) and Eric Elliott (Colorado Mesa University) have borrowed too many works; half the number would have made the point at a higher level. There is lots to see and mull over, but little to provoke or stimulate broader discussions about the world we live in now.