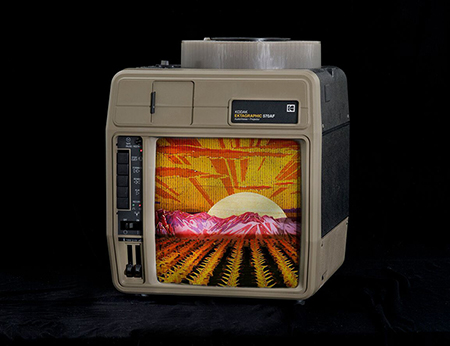 As outsiders, our knowledge of life in North Korea is limited to what that government dictates can be disseminated to the rest of the world. “North Korean Perspectives” consequently is centered on the search for truth amidst the propaganda. Twelve international artists investigate the Hermit Kingdom and all of its facades, posturing, suppression and absurdity. A majority of the works on the first two floors of this three-story space are photojournalistic. Documentary by nature, the realism engages us intellectually and emotionally more readily due to the uniquely closed nature of the society the images represent. This cuts across the individually varied sensibilities of the photographers.

Slovenian photographer Matjaž Tančič photographs ordinary citizens, like the women recorded in “Miss KIM and Miss YANG, 68, Meari Shooting Range, Pyongyang,” who smile for the camera in matching beige jackets, a firearm positioned between them. Likewise, Japanese photographer Ari Hatsuzawa records the life of the everyday residents of the nation’s capital city as they wait in line for the barber, nap on the morning commute to work or have fun at an amusement park. While Tančič and Hatsuzawa, through posed or candid shots, capture a facet of North Korea in which we see people living life in a manner not so different from our own, Belgian Tomas van Houtryve entered North Korea under a fictitious identity in order to photograph the hardship that is so obscured by government censorship. Van Houtryve’s images convey the bleakness of this workers’ utopia: crumbling streets, empty shipyards and an old lady struggling to carry her belongings down ancient stone steps.

Dutch artist Alice Wielinga is among the few artists here to apply a strictly aesthetic and poetic hand to the subject matter. On the third floor, Wielinga’s digitally collaged prints and video are a combination of North Korea’s grand, idealized propaganda imagery and clandestine photographs taken by the artist on an official tour of the country with her father. In “Battle in Spring,” a troop of beautiful women in military garb and armed with weapons gather beneath a blossoming tree in the foreground, with leaves adorning their shoulders and framing their delicate, serene faces. In the background, made minuscule by perspective, are a clutch of women working in the dirt, with identical shapeless uniforms, chin-length haircuts and red cheeks chapped by the weather. The video, which guides the viewer through the printed images hanging on the wall, is accompanied by a soundtrack of grandiose orchestral music and the artist’s anecdotal account of meeting North Korean workers in the countryside, where she witnessed the regime’s power over even the words that come out of its citizens’ mouths.

Wielinga’s work is the closest in this exhibition to giving us a suggestion of a North Korean voice, though hers is still very far off from it. The artists represented in “North Korean Perspectives” are outsiders from Europe, the US, Japan — even the three artists hailing from South Korea are banned from crossing the border to the north. The absence of an insider’s point of view is palpable. With its examination of North Korea’s contrived outward identity and the mere glimpses into real life there, “North Korean Perspectives” is an incomplete picture of the nation that we know so little about. This is certainly not a fault in the exhibition, but is perhaps the whole point.