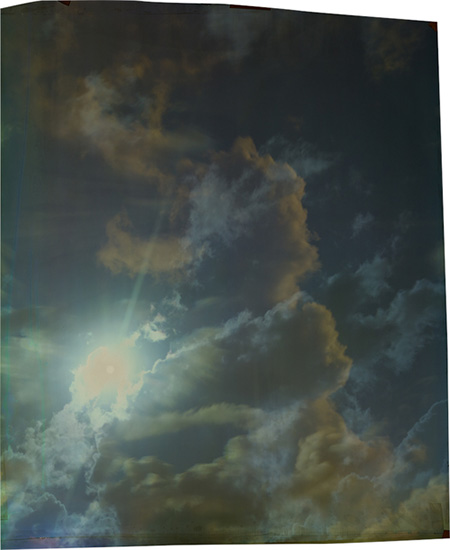 Photographer John Chiara’s new work, taken along the Mississippi Delta with his hand-built unwieldy camera (it’s big — he climbs into it), is as emotive as the blues, which originated from ex-slaves and descendants of slaves in the deep South. Chiara’s images convey an oppressive climate with their hazy or foggy look. What we see through that atmosphere are lonely roads, slightly damaged buildings, ominously empty landscapes and deserted public places.

Traces are left by his unusual spinning drum development process and the tape that secured the paper to the wall of the box. These visually punctuate the images and, added to the effect of the paper’s irregular shape that violates the convention of the neatly trimmed rectangular print, undermine any sense of the picturesque. A portion of the images that look up into the Mississippi sky reveal the artist’s stated fascination with the sun: “The sun radiates and creates energy here like no other place,” he explains. For example “In Delta at First South,” its brilliant colors due partly to the use of Ilfochrome paper, the sun breaks through the clouds of a sky in different shades of blue that feels like that poignant mix of despair and exhilaration evoked by its musical ancestor.