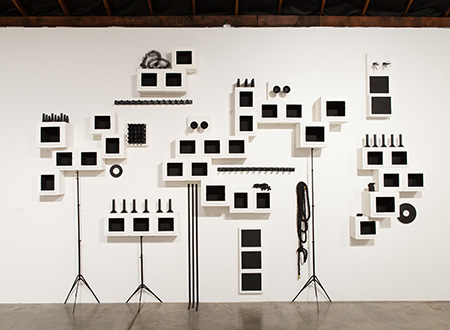 The trope of trash-to-treasure — turning found objects or detritus into artwork — is long since a veritable warhorse for art and craft exhibitions, especially in grade schools and country fairs. While such endeavors can work well as teaching tools, it’s unavoidable that most “artwork” that comes out of a trash can looks like it came out of a trash can, and moreover, probably should have stayed there. “GLEAN” is a welcome exception, however, with work by five artists who share a gift for finessing materials in unexpectedly sophisticated ways. Curated by Amy Wilson, the show is jointly mounted by the Recology, Metro and Crackpots organizations. To glean media for their projects, the artists foraged through Portland’s Metro Central Transfer Station, aka “the dump,” over a five-month period.

Notably, Brenda Mallory’s immaculate minimalist works look anything but trashy. In her installation, “Chill,” she has arranged white-painted boxes, black on the inside, in a Cartesian grid. There’s something clinical, almost sinister, about these empty boxes, which suggest televisions with blank screens, curio boxes devoid of curios, or, more broadly, a mind with no content or a soul without a moral compass. Creating artwork from recycled materials is second nature to Mallory, whose well-known textile-based sculptures are made from fabric scraps left over from the manufacture of reusable sanitary pads.

Adjacent to Mallory’s works are Brian Hutsebout’s sculptures, which make inventive use of metal, paper, wood, and rope. His wall-mounted “Hammered” is an étude of gently bending lines and shadow-play, while the free-standing “Balanced,” with its graceful curves, suggests a ballet dancer or a patch of seaweed undulating in ocean currents. Fashion designer-cum-artist Rio Wrenn contributes a suite of textile-based works centering around geometric patterns on sheets of diaphanous silk.  Wrenn creates these patterns by placing rusting objects on the fabric until the objects leave an imprint upon each piece. In the vein of last year’s traveling David Bowie exhibition and this year’s notorious Björk show at MoMA, Wrenn also includes fanciful costumes and props in her portion of the show, all of which were used in a ritual-like performance that she choreographed for the exhibition’s opening night. Finally, Beckey Kaye’s sculptures, “Thorny Oyster” and “Osprey,” turn nails and plastic into intricate circular fantasias, while Schel Harris’ scrap-metal sculptures play off of a Steampunk aesthetic. While pieces such as “Mechanical Monkey” have a winning whimsy, the works are more than a little bit Burning-Man and seem incongruous alongside the other artists’ cooler, more abstract contributions.

Overall the show lives up to the formidable challenge of minimizing emphasis on the lowly origins of the works’ media. Unless you were told, you wouldn’t guess the components were culled from a landfill. That’s a tribute to the artists’ ingenuity but also a reminder that in a post-Beuys, post-Oldenburg, post-Kienholz world, to use found, distressed, or just plain ugly materials is no longer déclassé. With its motif of re-purposing, the exhibition also capitalizes on the reputation of Portland itself as a mecca for recycling and green living. In a city where every stitch and trifle has its proper bin, slot or compost pile, it’s only natural that something as ignoble as a dump would wind up transmuted into an El Dorado for artists on the hunt for novel materials.