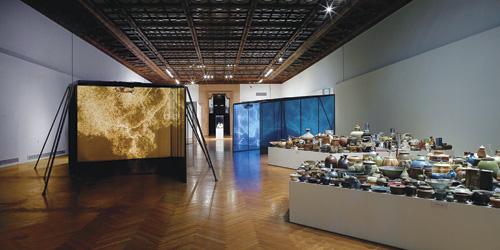 San Francisco Bay Area
Universities are the breeding ground for a rigorous engagement with ideas--they provide a site for theorizing and experimentation, as much as for research and resolution. Art galleries and museums often exist within the nexus of this fertile terrain, as dedicated space for the creative process. The position of these organizations in relationship to the host school varies from one to the next--some are embedded within the art department and some are stand-alone structures that exist separate from the art department, or even at a remove from campus altogether. Yet despite variations in resources, one constant is an ambitious vision of possibility, perpetuated by the multi-tasking curator/directors of these spaces. Chiefly the role of director encompasses every aspect of the venue, and regularly combines art scholarship with administrative management abilities and marketing skills. As a result of these expansive responsibilities, the position is also commonly regarded as one of great autonomy--it is an opportunity to showcase personal vision in a way that might be hindered in a larger, more compartmentalized institution.

Northern California, and the greater Bay Area in particular, hosts a number of university art galleries and museums with programs, exhibitions and lecture series that competitively vie for attention. Indeed, these spaces provide optimal career opportunities for curators who seek to expand their leadership role and to cultivate alternative perspectives. The attractiveness of these positions is owed, at least in part, to the location of the Bay Area on the periphery of the global contemporary art discourse. 'I came with the idea that this space is not specifically just an exhibition space, but rather the site of production, in an educational setting,' offers Hou Hanru, director of exhibitions and public programs of the Walter and McBean Galleries at San Francisco Institute. 'I saw the space more as a laboratory and discursive environment relative to the role of contemporary art in society.' Hanru, who joined SFAI three years ago, and who has since also organized major international exhibitions including the Istanbul Biennial 2007, considered the unfamiliar terrain of San Francisco optimal for his curatorial explorations of nomadic identity and global mobility in contemporary art. Here the psychological space for experimentation and remote location relative to art world centers, such as New York or London, are considered a virtue. So perhaps the periphery of the periphery might be the place to look when seeking out interesting alternative ideas? Herewith are just a few curators working further off the beaten path, quietly executing world-class visions in their own small and nimble university venues.

Renny Pritikin, Director of the Richard L. Nelson Gallery and Fine Art Collection at UC Davis, has cultivated a career from working in the margin between the institution and popular culture. An early proponent of artist-run spaces, he founded the National Association of Artists' Organizations, an artist-centered organization that fostered interaction among artists and artists' organizations at the local and national level that operated from 1982 through the late '90s. As the Executive Director of alternative space New Langton Arts and later as the Chief Curator of Yerba Buena Center for the Arts, Pritikin consistently recognized a star-ward trajectory in the careers of artists such as Barry McGee and Fred Tomaselli (both of whom he gave their first solo museum exhibitions). When asked to elaborate on his experiences with artists, Pritikin hesitates before allowing, 'It is really the museological struggles and breakthroughs that come to mind--and the challenge of how to get an institution to have ties to a community. If you really want to be radical and throw the doors open, you've got to include popular culture, material culture, amateur art, and so on.' Skateboarding, graffiti, Rap and Hip Hop, surf culture, outsider art, even the art of Star Wars have all been studiously examined themes in his works. He movingly cites his 2005 exhibition of little known photographer Joseph Selle as one of the more emotionally powerful experiences of his career. Selle, a street photographer who sold souvenir pictures of tourists in San Francisco for more than forty years beginning in the 1930s, amassed an archive of more than one million black and white negatives. For the exhibition at the Nelson, two thousand images were digitized and each projected in one-second intervals. Visitors who anticipated staying a few minutes were mesmerized by the images of the city over the decades, but also by the social implications of the diversity, fashions and expressions of the subjects themselves. The effect of the exhibition, at once simple and complex, embodies Pritikin's career-long examination of art through the wider lens of popular culture and everyday life.

Mills College Art Museum, in the Oakland foothills, recently appointed Dr. Stephanie Hanor as its new director this summer. Hanor, who rose up the ranks of the Museum of Contemporary Art San Diego from assistant curator to senior curator and, later, to department head, recognizes the importance of organizational history in her new role. 'You have to be aware of the history of the place--not only of the museum, but of the university as well, and whatever you do has to complement that history,' she says, citing Mills' legacy as the oldest liberal arts college for women on the West Coast, with an expansive collection of historical materials, such as prints, textiles, ceramics and paintings. Mills College Art Museum, which is housed in its original 1925 Beaux Arts building, combines the experimental sensibility of a university gallery with that of a stand-alone museum on campus. As an institution, it also reflects a very specific mandate to exhibit the work of women artists and curators. Echoing a sentiment repeated by other university curators, Hanor explains: 'There is a lot of autonomy and a tremendous amount of freedom in terms of the program, but also in how you manage the collection, work with students, and reach out to the audience. What I love about the museum is that it has been a laboratory space and place for contemporary ideas since its very inception.' Hanor inherited about 18 months of advanced programming when she arrived, which has given her time to flesh out her agenda. The museum's collection will function as a fulcrum for the development of her programming, with plans in development to invite artists to make selections for exhibitions and for the museum to partner with students to create a comprehensive catalog of the largely undocumented collection of more than 8,000 objects. Hanor is also interested in expanding the scope of the programming beyond the museum walls, with artist interventions on campus and lunchtime programs on the museum steps.

Mark Johnson emphasizes an examination of alternative histories, or rather 'important strains of American art that are not perceived as mainstream,' in his work as director of the Fine Arts Gallery of San Francisco State University. Johnson joined the faculty as gallery director in 1994 after previous stints at Humboldt State and SFAI. He credits collaborations with a number of prominent institutions, such as Stanford University and the California Historical Society, for the success of some of the in-depth projects undertaken by the gallery, such as 'With New Eyes: Toward an Asian American Art History,' a comprehensive publication and exhibition that delved into the history of Asian artists working in the United States from 1850 -- 1970; a project which took fifteen years to complete. Johnson describes students as having a key role in the methodical 'pre-internet' research essential to this type of survey--NEA and NEH grants support research that might involves trolling graveyards looking for headstone information or contacting family members about lost artworks. 'San Francisco State is the most diverse school in the area--across the spectrum of ethnicity and age ranges. When you think about SFSU's contributions to the art scene, you think about artists who speak to these diversities in art history and this is the work that we try to reflect in the gallery,' he explains. 'But beyond all of that it is an incredibly fun job. You get to put up exhibitions, but you also identify what needs research and what has been ignored. It is fun to create this kind of knowledge.'

Anu Vikram, an emerging curator recently appointed to the Worth Ryder Art Gallery in the Department of Art Practice at UC Berkeley echoes a similar sentiment: 'I love working with students--people who are asking questions and are fully engaged in what they are doing. There is very little time for small talk because every conversation is engaged with big ideas.' Worth Ryder Art Gallery provides students with a space to further the ideas that they have developed in the studio by presenting them in a public forum, along with a curated exhibition program and lecture series. This direct involvement with artists early in their careers draws on Vikram's experience as a former studio manager for artists Claes Oldenburg and Coosje van Bruggen. More recently she has worked as a program director for Richmond Art Center and Headlands Center for the Arts. Beyond experience, Vikram brings resourcefulness to a gallery with limited resources. While most university galleries lack for a well designed and prominent website due to bureaucratic red tape and branding restrictions, Vikram curtailed this issue by implementing Facebook to disseminate program information. It is a small gesture, but one that exemplifies the DIY spirit and day-to-day multitasking abilities necessary for the job. As Stephanie Hanor explains it, 'One thing that is nice about being in a university art museum is that there is some cushion--you are nestled within this larger institution, so there is a certain level of funding that comes from the university for support. Which means that you can focus on the program.'

This article was written for and published in art ltd. magazine.