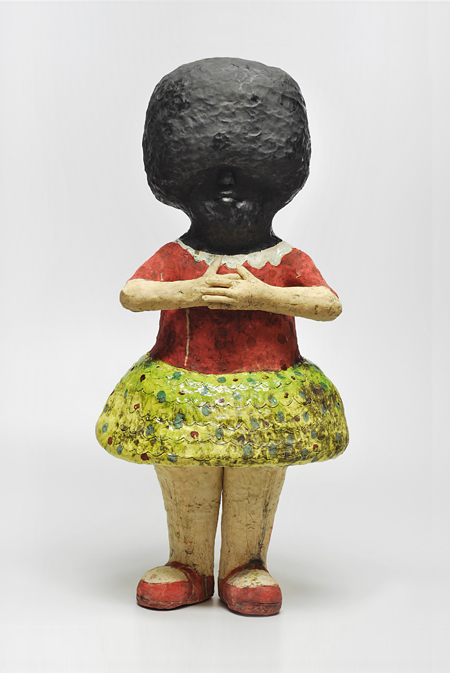 Could Kensuke Yamada be spreading himself too thin? After impressive shows at Catherine Person in 2006 and 2010, he is now teaching at University of Arkansas and could only send eight sculptures for the present show. Most are bigger (at four feet high) than any he has done before. Born in Kamakura, Kanagawa, Japan, in 1979 and educated in the U.S. at Evergreen State and University of Montana (MFA, 2009), his path going straight through the middle of the American university ceramics establishment, including such “post-doc think tanks” as Watershed in Maine, Archie Bray in Montana, and Penland in North Carolina has primed him for the numerous academic group shows which he is invited to participate in constantly (in 16 states). There’s a danger of thinning ideas supplanted by numbers. (Having begun his career as a rare artist-in-residence at Chihuly, Inc., Yamada may not have learned that lesson).

All that aside, these are among his most beautiful female figures to date. They do not all risk the insertion of metal collars that some of his other exciting work does, but the stolid solemnity of the children in stages of identity and age transformation has a remarkable psychological depth previously absent. Now they have escaped figurine status and come closer to Haniwa-figure size (the three-quarters scale Japanese medieval figures). As a result they seem more real, but not yet fully freed into life.

Rather, the drenching, dripping transparency of the glazes over rough stoneware is a combined reminder of their clay being. “Girl with Dress 1” and “Girl with Dress 2” demand your attention. Upended, head-standing “Girl with Ice Cream” defies belief yet rejects any statuette category roundly. The simplicity of Japanese children’s polka-dotted clothing reinforces the inviting facial expressions and two-fingered peace sign in “Sister with V.” One-piece swimsuits, Mary Jane sandals, and various playful hair color combinations — white and pink, blue and yellow, red and white — capture the mood of summertime leisure activities such as trips to the beach or a public wading pool in Tokyo.

Yamada shares a sense of recapturing his Japanese childhood with the older Japanese ceramic sculptor transplant Akio Takamori. The past decade, though active for Yamada professionally, has involved trying on other artists’ styles, such as Takamori’s, in search of his own. With several of the newer sculptures, such as “Standing Figure” and “Head 1” — in which the head becomes a blackened blob — there is a terrifying contrast with the demure child in a red-and-green dress under the head. This is the direction Yamada should go: a darker world introduced by the innocence of children, but sure to mature into an adult world of wariness and wisdom.