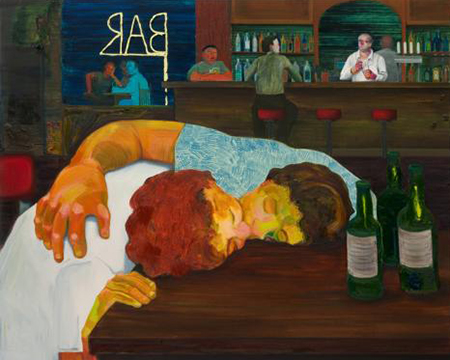 As abstraction has boomed in a seemingly still-strengthening market, figurative painting has never actually gone away, corpse-like as some claim. Paintings of figures in a post-expressionistic vain rarely feel worth our time, and rarer still do they it feel relevant. Nicole Eisenman manages to achieve both time-worthiness and relevance. Though her 20-year mid-career survey, titled "Dear Nemesis," is thoroughly satisfying viscerally and intellectually, those who know her work well may still long for certain works that didn't make the show's cut. The unforgettable "Jesus Fucking Christ" comes to mind. Her subjects encompass one-liners made epic, the pathetic, ineffectual artist, social issues (Tea Partiers, feminism, queerness, the poor) and homoeroticism par excellence.

The large wall of works-on-paper, primarily from the '90s and hung salon style, is well worth the effort required to peruse in its entirety. These come with a handy map with titles; each joke-based piece, whether a visual one-liner or more open-ended, packs a juicy wallop. One of Eisenman's early trademarks was intermingling cartoony figures with more classic ones, a dynamic style that's held up exceptionally well.

Recent work includes paintings that combine deftly wrought expressionist portraiture with African mask iconography, epitomized in "Breakup," featuring the latest incarnation of the sad sack double — handing over his cell phone in dismay. When revelry is depicted, whether in the bars or the beer gardens, it's always melancholic, even mournful. We can't be happy even when we're celebrating. Eisenman consistently delivers a high level of wit to her quirkily enigmatic renderings, with a light touch and without a trace of derivativeness. Take away either the wit or the craftiness and they may have succumbed to the black hole of figurative mediocrity. But neither is absent, allowing Eisenman's work to transcend the genre.