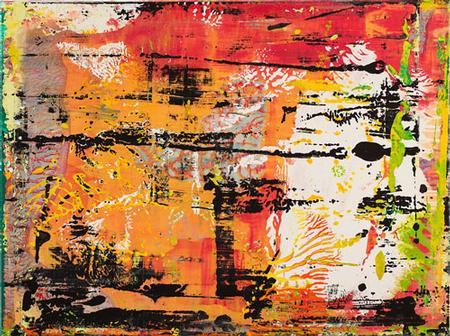 Butters Gallery’s recent migration across the Willamette River mirrors the flow of Portland’s creative energy from the stodgy Pearl District and gentrifying Old Town to the still-edgy East Side. With its current group exhibition, the gallery — inhabiting a temporary space (157 NE Grand Ave.) in advance of the impending move to the Industrial Southeast zone — is marking 27 years as an idiosyncratic fixture in the city’s aesthetic ecosystem.

Curatorially, the gallery has always showcased painters in the lineage of Abstract Expressionism, and this “27th Anniversary Group Exhibition" evinces that movement’s long legs. Indeed, there isn’t a single purely representational work in the entire show. Bernd Haussmann’s “Source (2283) 1” resplends with intricate washes of tomato red and lime green, shot through with branching tendrils that recall, albeit ever so obliquely, the structure of leaves. Melinda Stickney-Gibson’s “Here: Now Then” superimposes graphite scrawls atop short, buttery brushstrokes that manage to look like they’re still wet and slippery. In a departure from the encaustic work for which she has become well-known in the Northwest, Andrea Schwartz-Feit essays acrylic painting on panel in the virtuosic “Magnolia Chrysalis.” The work’s distressed wood, stapled swath of fabric, and central motif in bracing chartreuse contribute to an overarching composition that is semi-abstract, with the suggestion of plant life. Finally, Elise Wagner’s counterposition of celestial and terrestrial cartography and Jeffrey Butters’ opulent gold-dust fantasias round out an exhibition notable for its stylistic cohesion.