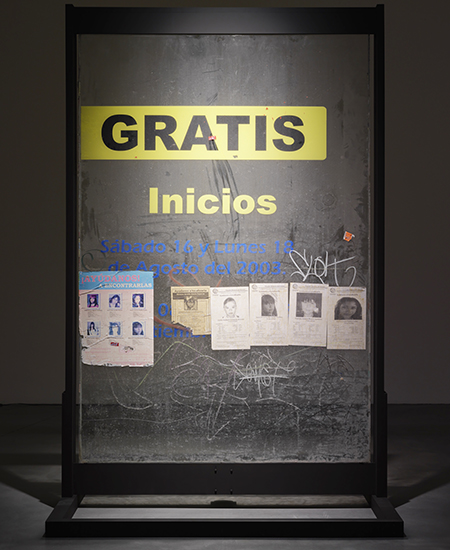 In an extraordinary validation of the artist as truth-teller, “Hidden Histories in Latin American Art” sheds light on modern-day atrocities and injustices in Guatemala, Colombia, Mexico and elsewhere — events that ought to, but often don’t, make the headlines. Yet in this compact exhibit — mounted in an intimate, darkened gallery and presenting a handful of internationally known artists — a number of socio-political messages are given symbolically powerful treatment.

Probably the most visceral of those messages comes in the form of “La búsqueda (The Search)” (2014), an installation by Teresa Margolles that replicates the experience of seeing “Missing” posters all over storefronts and transit shelters in Mexico. Using four-foot-high glass plates covered with tattered photos of young women and the accompanying pleas from their families, Margolles brings attention to the Cinthias, Mónicas and Marias who have gone missing, most likely as part of a surge of female homicides, in Cuidad Juárez in the last 20 years. Lending added sensory input and rhetorical force is the sound of rumbling trains and rattling windows, connoting the train that runs between Juárez and El Paso.

Another particularly jarring exposure of injustice comes courtesy of two Vincent Valdez drawings, together called “The Strangest Fruit” (2014). They decry the lynching of Latino men in the southern U.S. during the late 19th and early 20th centuries, in tandem with the lynching of black men yet not a crime given the same attention in the mainstream media then or since. Valdez depicts his two subjects in modern clothing, thus creating more resonance with viewers. More aesthetically important, the ropes are not depicted so that the two men appear to be floating, striking what may be seen as beatific poses.

Also represented in “Hidden Histories” is Doris Salcedo's “Untitled” (1995), a dramatic structure of one armoire atop another, both filled with concrete. Salcedo, who is the subject of a summer retrospective at the Guggenheim Museum in New York, has created similar pieces over the years to represent the political chaos and barriers to justice in her native Colombia. Meanwhile, Luis González Palma brings attention to the marginalization of indigenous communities in Guatemala with “Untitled (Mobius)” (2014). The sepia-toned photo of a face appears to be disappearing into a rolled felt rug. Rounding out the exhibition is a mixed media work by Argentine artist Graciela Sacco, commenting on her country’s history of political protest, and two works by longtime Phoenix artist Annie Lopez that address the subtle discrimination her family has faced over the years. By including Latino concerns both historical and contemporary, “Hidden Histories” comes full circle, with politically attuned artists tackling stories that warrant telling at multiple levels.