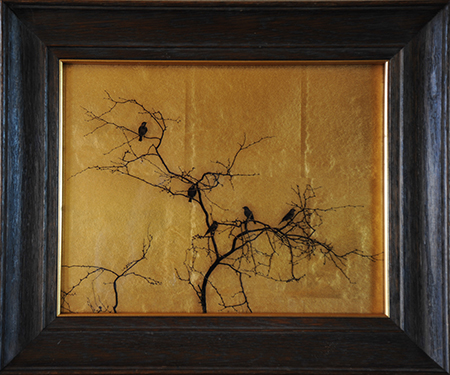 A visit to this show feels like stumbling into an attic that’s been sealed for a century. Salon-style clusters of monochrome prints fill every wall in a joint exhibition featuring veteran photographers Keith Carter and Kate Breakey. In a new series called “Ghostland," Carter experiments with the late 19th century collodion wet plate process to capture his stomping grounds in the East Texas swamplands. His crisp tintypes with dark, corrupted edges pick up the gritty textures of faces, fur and wings. Carter seems to delight in the damp splendor to which his subjects’ are resigned.

Breakey’s "Golden Stardust" series features a career-spanning selection of analog photographs, transformed into shimmering orotones. The Australian-born photographer transferred the images onto glass plates and backed them with 24 karat gold leaf, a process popularized by early 20th century photographer Edward S. Curtis. In this series, Breakey's diverse imagery — from delicate still lifes to vast landscapes — reads like an ever-expanding view of the universe, united by a decadent backdrop that activates every line and shadow.

I was delighted to find an image of Annie Dillard’s 1974 book "Pilgrim at Tinker Creek" among Carter’s tintypes. In the nonfiction narrative, Dillard re-imagines a small wood near her home in suburban Virginia as a vast wilderness fit for Thoreau. Carter and Breakey approach their work with the same level of scientific and spiritual focus, building intricate personal mythologies from subtle details. These photographers, through new experiments with archaic processes, have tapped into powerful contemporary vibrations.