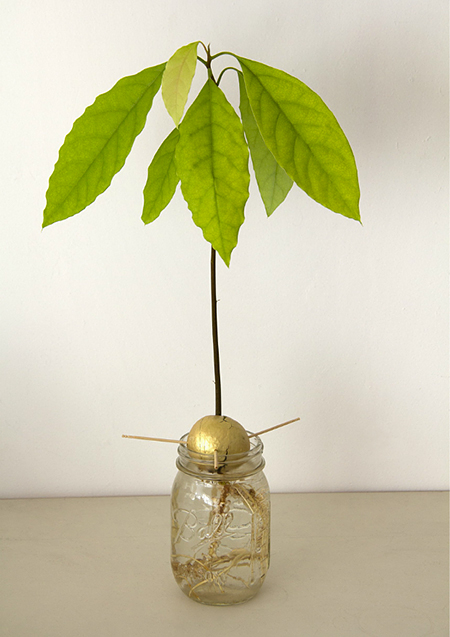 Conceptual artist and photographer Alice Shaw deploys her abundant talent and wit to seamlessly blend humor and serious insight in this newest body of work, which comments on much of what the golden state of California is known for: the Gold Rush, fame and celebrity, enormous wealth (as well as economic disparity), even agriculture. For many of the works, Shaw alters found images, many of celebrities, and enhances them by coloring in the background or otherwise decorating them with gold or silver leaf. “Pot of Gold–fame (LA)” features a two-page fashion magazine spread with the headline “Red Carpet Rainbow.” Photos of female celebrities, each in a monochrome dress, are arranged such that, across the page, the colors form a rainbow. Shaw puts a gold halo over each woman’s head, a clear reference to saintly pre-Renaissance paintings. One can also draw out the association between rainbows and the proverbial pot of gold, which is also referenced in “Pot of Gold–Riches (SF).” This piece shows a hand-drawn rainbow dropping down to the lower right corner on a postcard picture of an actual rainbow arcing over the Golden Gate Bridge. Acidly reflecting on celebrity’s place in our culture, Shaw trots out people famous as much for their bad behavior as for anything legitimately earned. A sheet of (fabricated) stamps are appropriately called “Forever Stamps (Paris Hilton, Lance Armstrong, Lindsay Lohan, Barry Bonds, Britney Spears, Tiger Woods, Miley Cyrus, Charlie Sheen).” The title speaks for itself.

Touching on wholly different sector of wealth in the state, “Money Tree” features the elementary school cliché of an avocado seedling sprouting in a mason jar, the pit suspended above the water with toothpicks. The pit here is painted gold. Called to mind in an instant is the key role of agriculture in California’s economy and the ongoing drought. Taking a look at the less glamorous side of California living is “Chariot,” a picture of a beat-up gold sedan parked curbside in front of a Mexican restaurant, a taco truck parked behind it. Our Latino population provides a great deal of the cheap labor for many of the thankless, grueling jobs in the state, a key component behind California’s wealth. For many among these populations, life is a little less shiny.