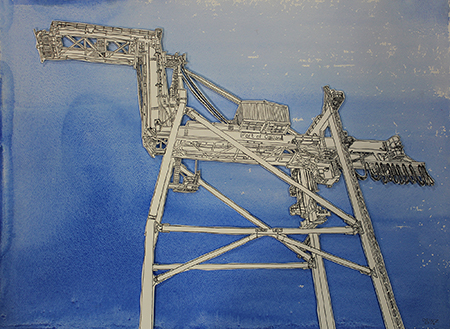 Sculptor and illustrator Rick Oginz mines his imagination, his observations and his personal issues before he ever puts a pen to paper or a chisel to wood. He constructs most pieces first as illustrations and then as hand-crafted 3-dimensional sculptures. In ”The Thinking Brain,” composed of diverse mediums, he combines an old-fashioned hand-carved wooden rolling cart with a 20-inch wide blue Fiberglas brain, the latter jutting out of it. When you push the cart, the right and left lobes of the brain move up and down oppositionally. He remarks that our understanding of the brain, which used to be the repository of thoughts and memories, is perceived today as independent, particularly as we read and hear that the brain can be altered with medication. He adds that the brain in this new age doesn’t really need a body.

The artist’s sculptures and drawings in this exhibition are primarily inspired by current events. “News Hour” is a flat screen TV crafted from wood, with an expressively painted image depicting PBS news anchor Gwen Ifill in front of a colorful globe of the world. Similarly, “Drones Over San Francisco,” also painted on a wooden flat screen, illustrates the city’s skyline, while the inclusion of several large drones over the harbor supplies ominous overtones to the image.

Then he surprises us with “Ready Made Made.” This 6-foot-high sculptural piece, with a 26-inch diameter circular wood block stuck into a stool, is “a sort of homage to Marcel Duchamp.” The latter’s 1913 “Ready Made,” also 6-feet-high, was made with a round stool with a 26-inch bicycle wheel attached to it. Unlike Duchamp, Oginz worked laboriously on his hand-made piece. Equally important is his intention “to take something from one context and put it into a new context” — in building this faux bicycle wheel — while achieving a “transformation from life to art." Further, Oginz’ “Ready Made Made,” while recalling Duchamp’s groundbreaking piece, reflects his own desire to tell stories through his work. In this case, it is an art historical tale. In other pieces, he tells stories about advancements in science and technology, his immediate surroundings, and social and political issues.

Several wooden wall relief sculptures of large container ships, a few depicted on carved iPhones, address our planet’s obsession with globalization; the artist theorizes that container ships, with their massive amounts of transported goods, are what makes globalization possible. In “Container Ship Underway,” a vessel is filled-to-the-brim with goods. Gray puffy clouds of smoke rise in the background, creating an ominous feeling. Oginz specifies that these sculptures are meant to be touched by the viewer.

“Cyclotron Being Powered” and “Cyclotron with Adam and Eve,” two drawings on paper, illustrate Oginz’ personal vision of the particle accelerator. In each drawing the giant machine is depicted as residing within and taking over the artist’s Oakland studio. “The studio interior is a metaphor for my mind,” he says. And thus we engage the artist’s mind at work.

Looking at Oginz’ oeuvre as a whole is to see the product of five decades of creative and conceptual evolution; of his perfecting his craft, using a wide assortment of media to depict and evolve his personal vision of the world. While the individual works are frequently politically charged, relating a foreboding perspective, their execution is often humorous and reflective of a buoyant nature, bringing otherwise lofty pieces down to earth. “The Thinking Brain” is like a giant child’s pull-toy. The container ships appear as much like boats in the bathtub as freighters on the open seas. And the cyclotron, completely inhabiting his cluttered studio, is like a kid's vision of a mechanical monster overtaking his world.