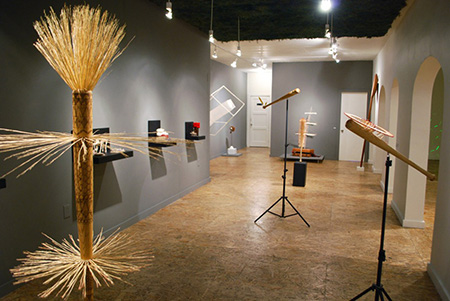 Culture, tradition, history, word play, object re-purposing and craft meld in multilayered ways in Michael Arcega’s current work. For the bulk of his career Arcega, a Filipino American has been exploring the intersection of cultures — often the intersection of colonizing and colonized cultures. And often, his place within that space, with (fittingly) an emphasis on the Pacific Islands and the United States.

For the past several years, he has been heavily influenced by the writings of anthropologist Horace Mitchell Miner, who came up with the concept of the Nacirema, a “real” people, but in a rather backward way: Miner’s texts describe this strange but oddly familiar group, who turn out to be: us (albeit, on first look, a distorted version). “Nacirema” flipped around is “American.” Miner’s work is an exercise in reflecting us back to ourselves from the vantage point of the detached observer.

Arcega has taken Miner's approach, but in place of writings, he offers objects from this bizarre culture. For the artist, it is a one-further-step-removed way of reflecting on this place he calls home, but which is distant from his personal origins.

In an odd coincidence between the artist and Miner, Arcega has a long history of riffing on words (he’s long used the moniker Agecram — derived from his first initial and last name), so while the backwards spelling of “Apocalypse” for the show’s title may be a 100-percent nod to Miner, it’s also classic Arcega. Naturally, all of the titles of the pieces in the show also play with language.

But this isn’t all cheeky fun (though every piece features a solid dose of humor, sometimes of the laugh out loud quality). The large installation “A Prih-Sohn Dancer's Dream (Isolation chamber bedding and hanging object for beating)” — featuring a spinning bell-shaped piñata, a rotating light ball projecting red and green, and emergency blankets sewn together to form a mattress the same size as is found in a prison cell — is a reference to the prison system that was specifically inspired by the group dance performances of prisoners in the Cebu Provincial Detention and Rehabilitation Center in the Philippines, videos of which went viral some time back. “Lotipac (Nacireman architectural model),” which resembles a model-scale replica of a domed building, like a capitol building, but comprised of a bird cage perched atop a fully functional mid-size-animal (think raccoon) trap.

Several works, all part of a series titled “Beisbol Club,” feature a single baseball bat that is altered and/or adorned in ways that evoke the primitive; American’s traditional pastime refashioned as artifact. Additionally, there is the hint of violence: bats can just as soon be tools for a game as tools of destruction or unsophisticated rebellion. One such member of the series is “PEN15 Club (Over-compensation wand or fertility club),” which is carved to (quite realistically) resemble a penis (complete with a crystal fitted into a hollow carved in the end) — a none too subtle symbolism abundant in many cultures as well as referencing the machismo of male professional athletes. Two other bat sculptures are decorated with matches, referencing torches and the gift of fire.

Several smaller works are arrangements of odd and whimsical objects, some of which Arcega decorated, some he left as they were found. The objects are often pieces found by Argeca at flea markets or thrift stores during his travels all over the United States. The trips are his “archeological digs,” part of his research into the Naciremans. It’s also worth mentioning that some of the works in the show are made from objects Arcaga found during his recent participation in the SF Recology Artist Residency Program, for which artists cull their materials from piles of discarded items — i.e., the trash. These are displays one might imagine the Naciremans using to decorate their dwellings: one setting, “Myleftfoot (Symbol of disbelief with Nacireman stories),” is a cast of the artist’s foot with pieces of faux fur attached to it resting on top of two books, "The United States in the Making" and "Hammond’s Complete World Atlas." Another, titled “Incognitum reliquary (A model of Peale’s Mastadon with Faux-ever 21 fur),” features two indoor climbing gym holds; a wooden model of a mastodon skeleton with, yes, faux fur from Forever 21; and a bone decorated with scrimshaw sitting on a delicate handcrafted pedestal Arcega made out of toothpicks.

While at once mysterious and also ripe with clear narrative possibility, the show taken as a whole provides the viewer an abundant opportunity to invent the world of these most curious people, and to have a laugh along the way, primarily at ourselves.