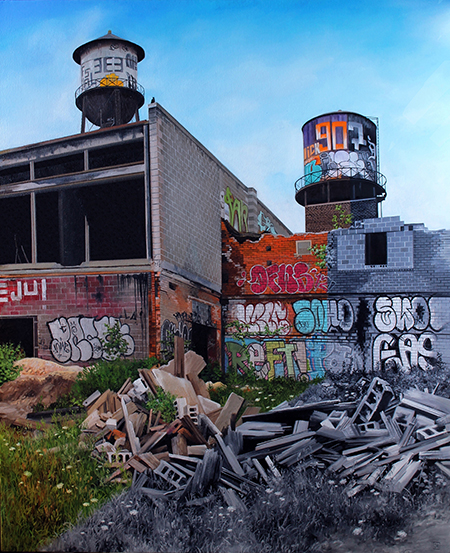 The title of this exhibition, "More Is More" is, of course, a play on the modernist slogan “Less Is More,” with which Mies Van der Rohe admonished his fellow architects to eliminate decoration and pare down their designs to their structural and functional basics. Tom Wolfe’s book "Bauhaus is Our House" descries the change in sensibility from modernist starkness to postmodernist whimsy and humor. Now that the postmodern ideal of the vernacular utopia is looking dated — starchitects, you have delighted us long enough! — the photorealist paintings of San Franciscan Jessica Hess depicting urban ruins from around the country that have been despoiled or embellished (take your pick) by graffiti have a timely kick. The feeling of impending doom in the Republic (at least as misgoverned by the American monster racing loony party) lends them, as well, the frisson of end times, one that 19th century viewers of Romantic paintings of Roman ruins would have recognized.

Hess may use photographs to capture the detail of these abandoned but aesthetically reclaimed sites, but the process is important, too. Thus she lets underpainting show through and at times reproduces the accidents of the photographic process as well: skies that are blue in one shot, for example, are nearly white in another, due to decisions made by an exposure meter. This decision produces a photo-mosaic appearance in pieces like “The 101.” Hess, on her interpretation of the subject through the painting process: “I began making an effort to explore the more expressive under-paintings of my work and preserving some of the happy accidents I would create in the sketching process. It's a shame to cover up these exciting parts of my process and I hadn't felt right doing so for some time.” These are works that combine cubist architectonic structure with AbEx calligraphy (laboriously rendered, in her case) and exalt the exuberant creativity of anonymous artists. But they also imply — at least for those attuned to muttering sotto voce to oneself about the circus of contemporary American culture — the end of empire.