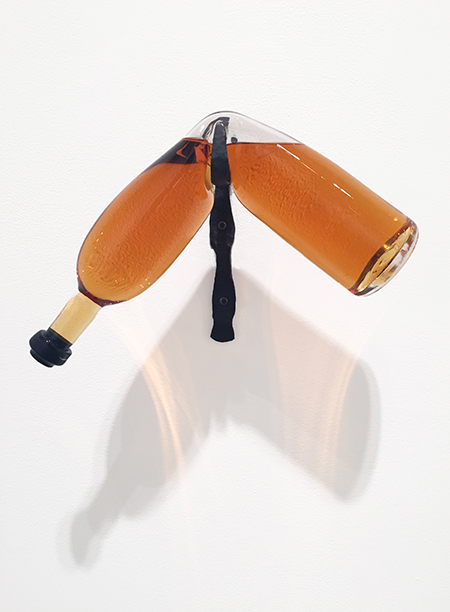 How many ways can Donald Lipski torment a hand-blown glass bottle filled with Scotch whiskey? More than a dozen, judging by this show. For the past year, he has been collaborating with glass makers at Tacoma’s Museum of Glass in Washington and Wheaton Arts in Millville, New Jersey, to create these intriguing works of art. The process begins when the glass team creates a container to his specifications, and continues as Lipski uses an object or a tool to alter it. For example, he pierces one bottle with a knife, squeezes another with a C-clamp, and pinches yet another with a pair of pliers. He even stretches and drapes one bottle over a meat hook. The final step is to fill the bottles with a generous pour of whiskey and seal them with a rubber stopper.

Lipski has long been known for assemblages that combine a variety of found objects, as well as large-scale installations. This the first series of small works he has produced since shifting his focus to public art roughly a decade ago. "Whiskey River" combines several things he enjoys: glass, collaboration, experimentation and his drink of choice, Scotch whiskey. For “Whiskey River No. 43” the artist dropped nails into a whiskey-filled vase, starting a chemical reaction that is creating a layer of sediment at the bottom of the vessel, a process that may dissolve the nails completely at some point.

Working with glass is hardly a new interest. In the past, Lipski has worked with glass artists at Pilchuck School of Glass, Rhode Island School of Design and Corning Glass, as well as Murano, Italy. His glass works have been broken, beaded and spun; lenses, mirrors and crystal balls; test tubes, prisms and eye glasses. Lipski has always sought to entice the viewer with surprising juxtapositions, and this series is no exception. Violently pinching, piercing and bending fragile blown glass, then filling it with a volatile liquid has resulted in artworks that are visually enticing and metaphorically rich.