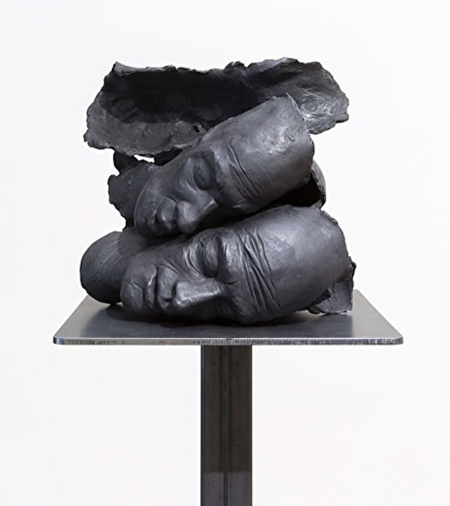 Making art is usually a solitary affair. When you put forward the conceit of asking two artists to collaborate on one work, you are liable to get uneven results. For “Eye 2 Eye” ten artists from the longtime Phoenix collective Eye Lounge were asked to form five pairs, even though one of the most attractive characteristics of Eye Lounge is that its artists have such divergent oeuvres. So, not surprisingly, most of the collaborations are only mildly interesting. It’s the addition of solo works that actually enlivens the show.

Cherie Buck-Hutchison is well-represented with photographic compositions consisting of layered archival photos. The faded images harken back to strong family and religious values of the mid-20th century, while intersecting with summer vacation snapshots. The combinations give off a haunting, something’s-not-quite-right-here quality. Ceramic artist Constance McBride — who often creates realistic faces and busts — explores the deconstruction of her work in “Whisperers,” in which five black ceramic faces form a pile on a pedestal, compressing each other like discarded rubber masks. Popular Phoenix painter John Randall Nelson has three works of his own in the show, the strongest of which is “If I Could Find My Reasoning.” The large, paneled work incorporates barely decipherable text, stray paint drips, penny-sized circles and a yellow-and-black target board that seem to take joy in its randomness.

Where collaboration hits its mark is in “Cock-a-lorum,” in which Turner Davis inserts one of his surreal pencil drawings — this time a rooster subsuming a running man — into the middle of a signature Nelson painting, turning the new whole allegorical.