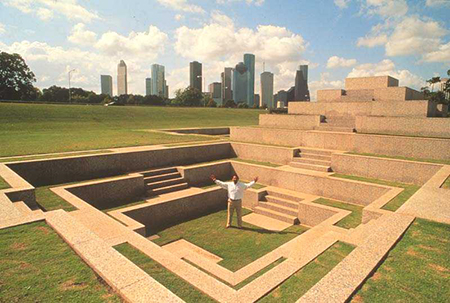 Jesús Moroles, who died last month in a tragic car accident, was the son of cotton pickers who went on to become a humble giant in the field of contemporary sculpture and public art. Among his many distinctions, Moroles served on the Board of Commissioners of the Smithsonian American Art Museum and was a recipient of both the Texas Medal of the Arts and the National Medal of Arts, which he was awarded in 2008 during the George W. Bush administration.

Born in Corpus Christi and raised in Dallas, Moroles began drawing as a child. During high school, he learned how to build with concrete while working a summer job for his uncle. He discovered granite, the medium for which he is best known, while a student at the University of North Texas, Denton. After a year working as a studio assistant to the late Luis Jimenez, Moroles took another year learning how to carve marble in Italy. Ultimately, he rejected marble in favor of granite because of the latter's earthy qualities. Throughout a prolific career that spanned more than thirty-five years, he created numerous sculptural monuments, both private and public, many of which he considered to be sacred reflections of the human connection to the earth and the cosmos.

Moroles three-block studio compound in Rockport, Texas, operates as a family business, where relatives and other employees have collaborated on various aspects of his projects since 1982. Moroles knew every type of granite, which can be distinguished by color and texture (his personal favorite, from Fredericksburg, Texas, has a raw, earthy texture). He never used a computer for sketching out his ideas, choosing instead to draw on paper placed on the ground. This was, in fact, just one of several ways that he chose to maintain a connection to nature. Another was to reject the use of pedestals for exhibiting smaller works, because that would keep them too far from the earth, from where the granite emanated. With this in mind, he created one of his more inventive gallery installations by exhibiting small scale sculptures on the tiles of a chessboard that he assembled using dark and light granite squares.

Moroles was very calculating in the placement of outdoor sculpture. In an early example, “Window" (1981, Dallas Jesuit Museum), four large slabs of granite are arranged to form a large square that is open in the center such that it frames the landscape. Located on a hilltop, the view through the window appears as sky when seen from a distance, and gradually shift to landscape as one gets closer to the sculpture. In later works, such as "Mountain Steles" (1989, Desert Mountain Corporation, Carefree, AZ) and "River Steles" (2009, San Antonio Museum of Art), tall granite pillars that appear to rise from the earth are lined with stainless steel to reflect the sky and clouds, thereby suggesting a cosmic continuum.

Among the many attributes for which Moroles will be remembered is his thoughtful and highly creative approach to public art commissions. Particularly noteworthy are his projects for the Oklahoma Medical Research Foundation(2000) and the Houston Police Officers Memorial (1992). For the Medical Research Foundation, Moroles gave considerable thought to the foundation's function, and in response designed circular elements for the floor and suspended from the ceiling that are adorned with patterns depicting atoms, chromosomes, DNA, and penicillin. He also made good use of his extensive knowledge of his materials and, using only natural granite, employed a diverse palette that includes green, red, black, white, and a variety of earth tones.

When invited by the late arts patron Dominique de Menil and the late Houston Museum of Fine Arts Director Peter Marzio to submit a proposal for the Houston Police Officers Memorial, Moroles deliberated for a full year. The design that he eventually implemented combines the forms of an historical ziggurat, the stepped pyramid that was part of religious complexes in ancient Mesopotamia, and the Greek cross.  To create the four arms of the cross, Moroles conceived the idea of digging the shape of an inverted ziggurat directly into the earth, and repurposing the dirt to build the above-ground body of a ziggurat, centrally located at the intersection of the cross's arms. Measuring 120 x 120 feet, the Police Officers Memorial is one of the great monuments of our time. Visitors can walk down its granite steps from any of the four directions to stand amidst a sunken lawn of green grass, which reinforces our connection to terra firma. From there one can gaze upward at the stepped ziggurat and towards the sky, or climb the steps to the top to find a serene fountain where the names of slain officers are inscribed. As a memorial, Moroles' monument does more than simply record the names of lost lives. While honoring the dead, it envelops and engages visitors in a participatory experience, one that calls attention to our shared connections to the past, to the planet, and to the universe.