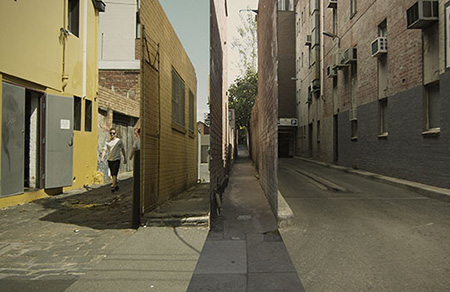 In Jewish tradition, the day begins at sunset rather than sunrise. So "Night Begins the Day" examines the big questions of time, space and beauty, i.e., the Romantic Sublime, with a new cultural inflection. The twenty-two artists working a a wide range of media from around the world include Peter Alexander, Lisa K. Blatt, Daniel Crooks, Peter Dreher, Moira Dreyer, Laurent Grasso, Werner Herzog,  David Horvitz, Institute for Figuring, Masood Kamandy, Robert Koolma, Alicja Kwade, Michael Light, The Long Now Foundation, Jorge Macchi and Edgardo Rudnitzsky, Vanessa Marsh, Josiah McElheny, Klea McKenna, Katie Paterson, Louis Sahagun, Fred Tomaselli and Christopher Woodcock. That’s a stellar array, so it is not surprising that the work is at least beautiful, and for the most part serious as well. But the deep bench of talent is a drawback as well as an asset. The work is too diverse and varied to sustain a prolonged mood. That said, there are individual works that one should not miss.

Peter Dreher’s eighty small oil paintings of the same glass of water from the “Day by Day, Good Day" series of about five thousand started in 1974 sustain focus and depth from revisiting the same modest still life. Michael Light makes terrifyingly beautiful appropriated color photos of A-bomb detonations. The photograms of rainfall and nocturnal skies by Klea McKenna and Vanessa Marsh, respectively, also stand out.  However, the most compelling work was in video. In Lisa K. Blatt’s clearest lake in the world, the starry night sky reflected in the tremulous black waters of an Argentine lake. In Daniel Crooks’ "A Garden of Parallel Paths” — a reference to Jorge Luis Borges’ forking paths? — alleyways from different countries are digitally combined, separated by vertical planes ‘printed’ with stucco, brick and concrete, like stage flats. We look deep down these pathways while the camera pans to the right, causing people and cars to appear and disappear, like figures in moving mirrors. In Laurent Grasso’s elegiac "Soleil Noir" the camera roams around the ruin of Pompeii, sidling down ancient colonnades, soaring above to follow a feral dog, or pausing to examine painted murals from two millennia ago.