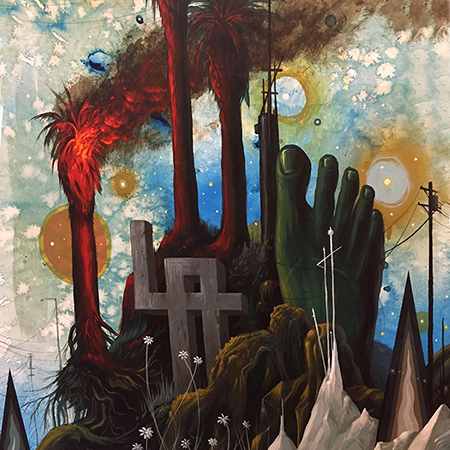 Soto is known for combining aspects of traditional painting, street art, illustration, and mural techniques. For his first solo exhibition in Los Angeles since 2006, Soto uses familiar imagery found in urban cityscapes — telephone poles, power lines, and orderly processions of the ubiquitous SoCal Palm Tree — and combines them with fantastical imagery to produce unsettling and mysterious narratives. Cartoonish creatures, geometric intrusions and other disconcerting elements, such as an enormous human foot protruding multiple stories from the earth into the night sky, partially obscuring what appears to be the barrel of a revolver equally out of scale, allude to the malaise and hazards of present-day urban culture. However, all is not lost in the artist’s “Nightgardens.” The sublime undercurrent created by the chaotic imagery is balanced by the whimsical and painterly approach taken by the artist in his multicolored renderings of nighttime skies and fanciful landscape motifs. The overlapping layers of color, dripping paint and vigorous brushwork counter the gloomy atmosphere with a subtle optimism.

The precise linear style of Masakatsu, on view in the back gallery, provides a striking stylistic contrast to Soto’s “Nightgardens.” The show, titled “Blind Box,” brings together drawings and oil paintings in which industrial factories, ramshackle buildings, and mysterious floating orbs inhabit desolate post-apocalyptic landscapes. The spheres, a motif often employed by the artist, appear as though constructed from a haphazard repurposing of pre-existing commercial structures, oversized vending machines, and consumer products. For Western audiences, it may be tempting to suggest a merging of the Precisionists’ visual acuity with Magritte’s surreal out-of-scale visions, such as "The Voice of the Air" (1928) in which a cluster of ominous bifurcated spheres hang in the night sky over a distant mountain horizon. The hovering forms suggest an overbearing authoritarian power, a re-envisioning of Foucault’s conceptualization of the panopticon taken out of the prison, deployed instead to provide unlimited surveillance over a subjugated population. On a lighter note, one might even be tempted to make an allusion to the Death Star, which may not seem so corny when one considers the implications of surveillance and military power associated with the planet-sized icon of science fiction.

However, Masakatsu's intent seems far less ominous. In a 2013 exhibition at Jonathan Levine Gallery in New York, paintings of equally distraught environments were described with the intent of  “finding beauty in the design of machines and products, even when discarded as waste.” The artist explains, “Selectively absorbing and processing our environment, whether conscious or subliminal, is part of our evolution and results in the composition of who we are, the world we live in, the systems we create and values that are prized.” And there is a beauty in the meticulous craftsmanship with which Masakatsu depicts these futuristic dystopias; even the rust is lovingly detailed, subtle complements of orange-brown offsetting the cool gray tones. Instead of viewing the compositions as a simple reclamation of one man’s trash as another’s treasure, they seem better understood as a cautionary tale of where our evolution might lead.