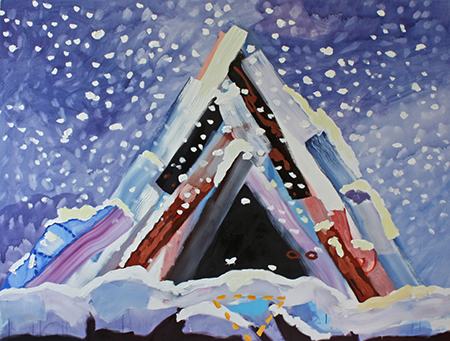 “Dwell" serves two purposes: to display a thoughtful range of contemporary and historical drawing, painting, and photography that shares architectural subjects; and to provide a very convincing introduction to the gallery’s strongest talent. People, families, houses, the environment, community interchange and personal freedom are recurrent themes in this survey.

Just because I see so many group shows, I often try to confound the paths of my entry or exit, affirming or challenging the way a show is laid out — when any thought is given to it at all. This gallery is challenged with an awkward storefront space on a steep hillside with a confusing configuration of ramps and steps that almost forcibly lead the viewer in one direction or another. It turns out that in this case it is definitely an asset. The visitor can be guided through curatorial narratives.

Cable Griffith’s magnificent “Mountain Stream” blindsides the viewer turning the first corner down the ramp: Civilization and nature blend and coexist, but with terrifyingly regulated results. Similarly, adjacent tiny (8 inch) pencil drawings of flood-submerged cars and houses, based on news-photos, by Samantha Scherer shock expectations. Drawing close to eyeball the intimate pleasures of an exquisite graphite, you are instead plunged into a vivid world of peril and death by water.

Photography has a dialogue with everything in art nowadays, and “Dwell” delineates historical roots as well as contemporary expressions. Take “In My Room, Paris, 1905” by 1920s icon Jacques-Henri Lartigue. The bachelor’s highboy chest alone could be a dwelling place and the wallpaper calls to mind Oscar Wilde’s reputed last words spoken while dying in a similar Paris hotel room, “My wallpaper and I are fighting a duel to the death. One or other of us has got to go.”

The flexibility of dwelling is conflated by the real timber pole tent installed in the gallery by Eirik Johnson alongside his photos of Crescent Lake, Oregon “mushroom camps,” annually inhabited during the picking season, and then abandoned, by illegal immigrants dating back to 18th-century France. A classic Alfred Stieglitz Pictorialist view, “Flat Iron [Building], October” (1903),” competes with a starkly real Walker Evans scene from the height of the Great Depression, “West Chester County, NY” (1936). Contemporary photographers JoAnn Verburg and Linda Connor render ordinary interiors dangerous and foreboding, while Lori Nix and Julie Blackmon, two other photographers working in color, invade middle-class domestic spaces that are either models of consumerism or horrid examples of shopping gone wrong.

Susanna Bluhm’s “Big Teepee in the Snow (Pretend)” is the show’s centerpiece painting, a giant rainbow-striped Sno-cone (4 by 8 ft.). Dappled with snowflakes falling on cedar planks around a mysterious black triangle, it manages to be simultaneously abstract and representational, a standout quality among the young abstract artists the gallery has been attracting. Gala Bent straddles the same chasm. “Split-Dimension House Plan” is extraterrestrial and no doubt prescient.

What is it about uncompleted building projects that so attracts Thuy-Van Vu? Her “North Seattle” tells it all, capturing the wave of hundreds of multi-use, high-density apartment buildings that have gone up in the past decade. However raw or unfinished the building looks, or how startlingly permanent her “Observation Tower” appears, Vu is using dwelling as a metaphor of confinement and inexorable containment. Mark Thompson’s “Untitled 61” is completed, offering no escape route whatsoever. People are free to dwell in growing Seattle; but the artist guarantees neither expectations of happiness through idealistic architecture nor misery in dystopian street scenes.

Linking to the 1970s golden heyday of black-and-white photography, Michael Kenna is the top of the back room vintage inventory group. His three Japanese winter scenes of hand built greenhouses and livestock cages return the conversation to abstraction and representation. Like several of the others in “Dwell,” Kenna is master of both houses.